BLOEMFONTEIN – An 11-year-old boy is expected to appear in the Bloemfontein Magistrate’s Court today after being arrested for allegedly stealing cell phones out of cars parked at a church.
Police spokesperson Thabo Litabe said in a statement the child was arrested on Sunday after an off-duty police officer caught the boy in the act. A 48-year-old Nigerian man, who allegedly bought phones from the child, was also arrested at his cell phone shop on Monday and is expected to appear in court today.
Litabe says a police Major, whose cell phone had been stolen out of his car at St Patrick’s Church in Bochabela the previous week, returned to the church on Sunday, kept watch and saw the boy trying to open several cars. He confronted the child, who led him to his home and a salon where several cellphones and mobile DSTV viewers were recovered.
The boy has been released into the care of his parents.
Police are appealing to anyone who might have lost a cellphone while attending church in Bochabela, Phahameng, Batho and Sports to contact Gheshiwe Mananzi at the Mangaung Police Station on 082-526-2855 to verify whether their devices are among those recovered.
-STATEMENT 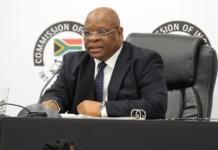 Sars is seeking to criminalise mistakes