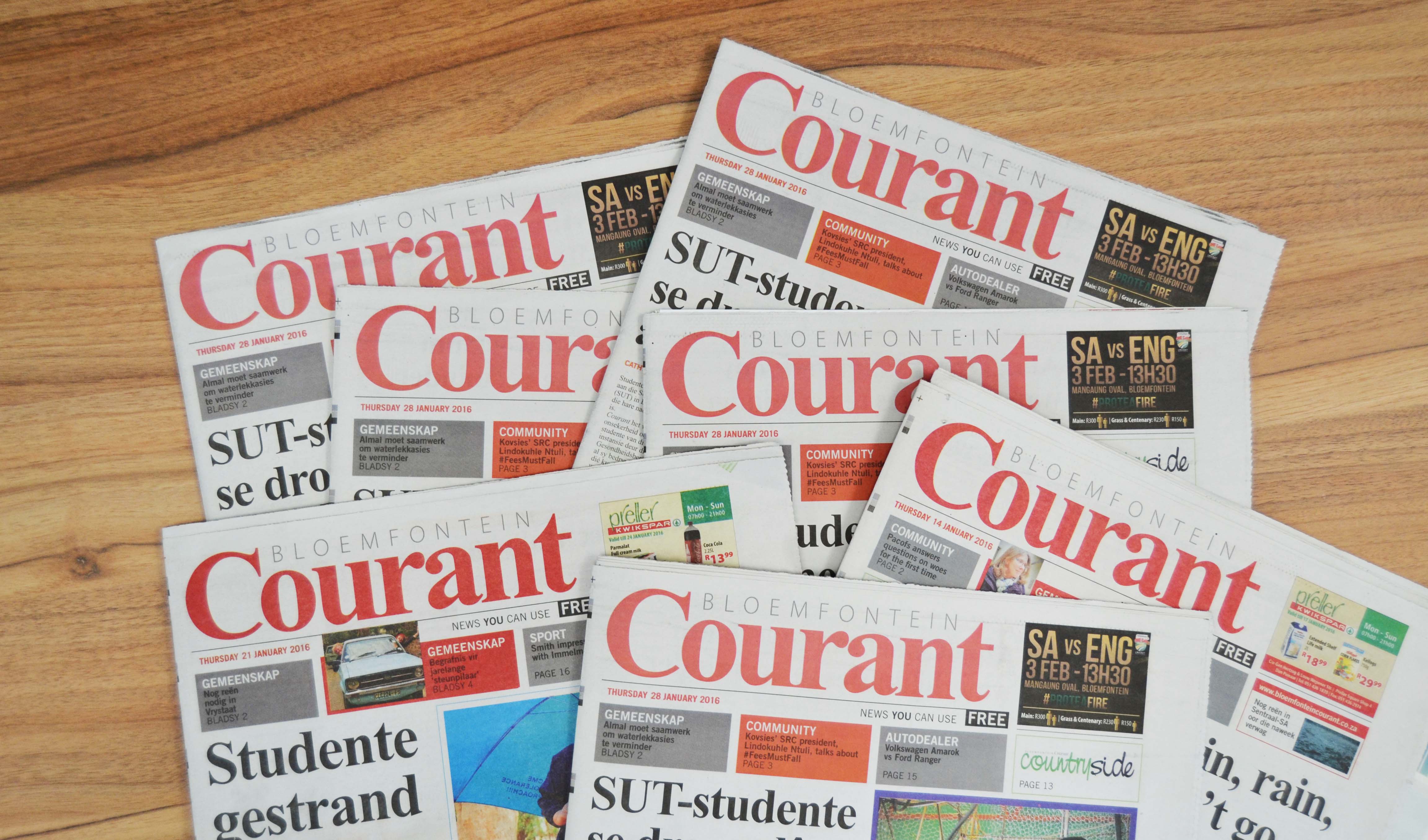 Bloemfontein Courant is owned by Mahareng, a subsidiary of Caxton Community Papers and joint venture between Caxton CTP and Central Media Group. Mahareng Publishing also owns Get It Bloemfontein.

The precursor to Bloemfontein Courant, an independent community paper called Krant, was first established in June 2009. Bloemfontein Courant celebrated its 10th anniversary with great fanfare in 2019.  The celebrations included a long list of activities, of which the most memorable were a Staff Activation, the Client and Stakeholder Function, an Internal Cake-cutting Ceremony, a Business Breakfast, as well as the Primary Schools’ Poster Competition.

Bloemfontein Courant provides readers with positive and constructive content that is in line with the slogan: “News you can use”. The publication focuses on important happenings in our local community, but presents everything with a voice of reason to our readers. It also operates as a watchdog to protect the community against exploitation. These are some of the traits that make Bloemfontein Courant stand out from other publications in Bloemfontein and the wider Free State.

Bloemfontein Courant is a bilingual newspaper with a distribution figure of 50 000 free copies per week in Bloemfontein as well as many other small towns in the rural parts of the Free State. The paper is delivered at households and at selected hotspots like shopping malls, filling stations and the offices of government departments.

The entire newspaper is published in full colour, neatly packaged according to the latest journalistic and design trends, and great attention is paid to the quality of the printing, which is done by Novus Holdings.

There are often special features in Bloemfontein Courant, i.e. Careers, Women in Business, Top Schools, etc., which not only provide readers with valuable information but also present our advertisers with an opportunity to directly reach their target market.

Bloemfontein Courant’s fresh and innovative logo design grabs readers even before they’ve started reading. Great effort is put into every edition, making sure it always meets the highest standards of design and content.

Bloemfontein Courant focuses on positive, constructive news that is hyper-local and contributes to a better, improved, informed and/or safer society. Content is published in Afrikaans and English. Content informs, educates, entertains and protects the rights and values of its readers.

Bloemfontein Courant speaks with a voice of reason and fairness, while striving to supply an excellent service to the readers, stakeholders and advertisers.

Courant has a food page every week, featuring tested recipes by local chefs. This pillar is one of the most read in Courant.

Bloemfontein Courant includes a social page most weeks with photos of charity events, schools news, social gatherings and other happenings.

Bloemfontein Courant’s sport section is handled by sports editor, Morgan Piek. It covers the national sports highlights, as well as general sports news in our region. Courant strives to give coverage to different types of sport and not only concentrate on the popular sports.

Angie tells the nation when schools will reopen