The Stay Safe, Mask Up! campaign by Bloem Show and Bloemfontein Courant has left smiles on the faces of a number of healthcare workers in the city. The kind gesture of letters from primary schools reminded them of how appreciated they are.

After a successful run, R33 050 was raised in aid of healthcare workers and the donations campaign has come to an end.

The businesses and residents who donated to the campaign were:

A considerable amount of money was also received from residents who preferred to remain anonymous.

The campaign was aimed at encouraging both businesses and individuals to show their gratitude to healthcare workers by donating care items, which included Nkosi Superbars as well as letters of appreciation from local primary school children. 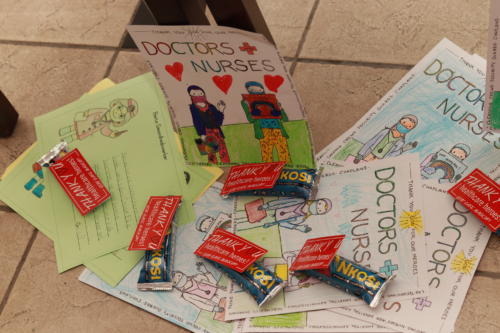 Elmarie Prinsloo, CEO of Bloem Show staff, said the donation period unfortunately had to come to an end, so that the distribution of the Nkosi Superbars could be started in all earnest.

“A heartfelt thank you to every business and individual who donated towards this great project. Although the campaign was done under the banner of the Bloem Show and Bloemfontein Courant, it was really aimed at showing appreciation for the work that our healthcare workers are doing on the frontline.

“We are also extremely grateful to the schools that took part in the project. The hundreds of messages written by learners from these schools have been received with so much appreciation and love by the frontline workers,” Prinsloo added.

The primary schools that took part in the campaign were:

Prinsloo said the handovers were overwhelming and received with much gratitude and emotion. It is especially the letters from school children that pulled at people’s heartstrings. She thanked everyone for every donation and letter, the gratitude of health workers made every moment of the project worthwhile.