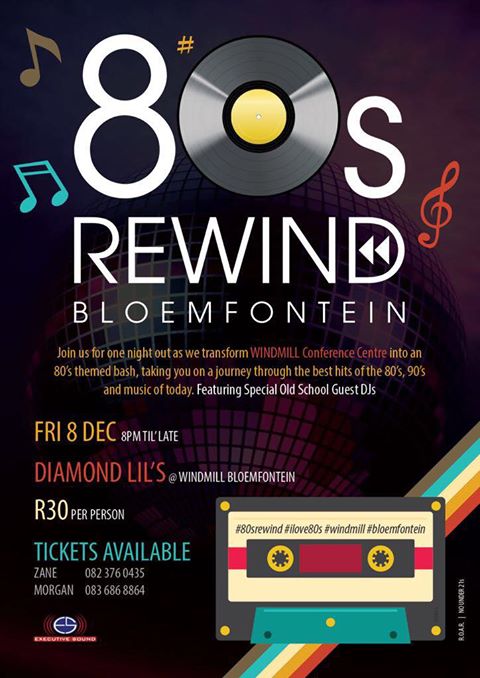 Bloemfontein audiences with a love for ’80s music will be in for a treat on the second Friday in December, courtesy of event planners Executive Sound. Event organisers Morgan Ponambalum and Zane Koeberg say this event aims to provide an entertainment platform for a mature audience as often this group is left out when events are organised.

“We will be taking audiences who used to love going out on a trip down memory lane by playing the very best hits from the ’80s, ’90s as well as music of today. We will even be bringing in some Old School Guest DJs from Durban to make sure those attending the event have the time of their lives,” Ponambalum said.

While it is not the duo’s first time organising an event like this, they say the last time they had something like this was in February 2016 and they hope to provide audiences with the same enjoyment one more time.

They are also not doing this for money but rather so that members of the Bloemfontein community who enjoyed club hangouts such as the famous Mingles Club, which was in Heidedal, can have a place where they are able to both relive those moments of youth as well as the music of that era. “If you consider the fact that our tickets are only R30 per person, you get to see that we aren’t in this for money.  Actually, many of the costs will be coming from our own pockets. All we want is to provide audiences with a meaningful experience,” Ponambalum said.

He further added that the response to this event has been tremendously positive as over 300 tickets have been sold thus far and only about 50 are remaining.

This event will serve not only as a good excuse to reminisce, dress up in your favourite ‘80s outfit and dance like you did in that era but it will also provide a platform to bump into people you have not seen in a while.