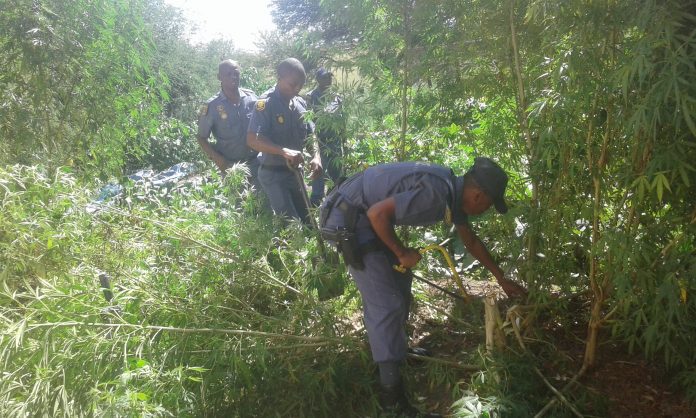 The Selosesha K9 police unit destroyed dagga plantations and arrested one suspect at the Sannaspos Railway Station near the N8 road between Botshabelo and Bloemfontein on Monday morning.

The Selosesha Flying Squad was called in as back as police acted swiftly after receiving information about dagga trees that were allegedly planted behind a tuck shop in Sannaspos Railway Station  the same morning.

Upon arrival and investigation behind the tuck shop members found the garden full of dagga trees.

A 33-year-old Indian male who allegedly planted those trees was apprehended for dagga plantation.

Police say the suspect is from Durban but he was employed to take care of pigs at Sannaspos in an issued statement.

Police members used saws and spades to remove the dagga plantations weighing 99,9 kilograms with an estimated street value of R 99 900,00.

The apprehended suspect is expected to appear before Botshabelo Magistrates’ Court soon and will be facing a charge of dagga plantation.

The Free State Police Provincial Commissioner, Lieutenant General Lebeoana Tsumane urged community members to continue providing information to the Police that will remove drugs out of our communities.