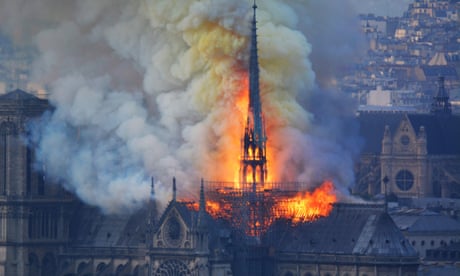 A fire that devastated Notre Dame Cathedral in the heart of Paris was brought under control by firefighters in the early hours of Tuesday morning, though officials warned there were still residual fires to put out.

Thousands of Parisians watched in horror from behind police cordons as a ferocious blaze devastated Notre Dame Cathedral on Monday night, destroying its spire and a large part of the roof.

An investigation has been opened by the prosecutor’s office, but police said it began accidentally and may be linked to building work at the cathedral. The 850-year-old gothic masterpiece had been undergoing restoration work.

The French president, Emmanuel Macron, attended the scene and later gave a speech in which he vowed that the cathedral would be rebuilt, as fire crews said the landmark’s rectangular bell towers and structure of the building had been saved.

Macron said “the worst had been avoided” thanks to hundreds of brave firefighters who battled for hours and who would continue working through the night. One firefighter was severely injured but no other casualties were reported.

“What happened tonight in Paris, in this cathedral, is a terrible event,” the president said, vowing to raise funds worldwide and bring the best talents from around the world to reconstruct the building in its entirety.

“Notre Dame is our history, our literature, part of our psyche, the place of all our great events, our epidemics, our wars, our liberations, the epicentre of our lives … So I solemnly say tonight: we will rebuild it together.”

Thousands of Parisians – many weeping and some praying – watched as vast orange flames soared from the roof for hours, threatening one of the greatest architectural treasures of the western world. There were gasps on the southern bank of the river Seine as locals watched fire sweep across the roof, which slowly caved in.