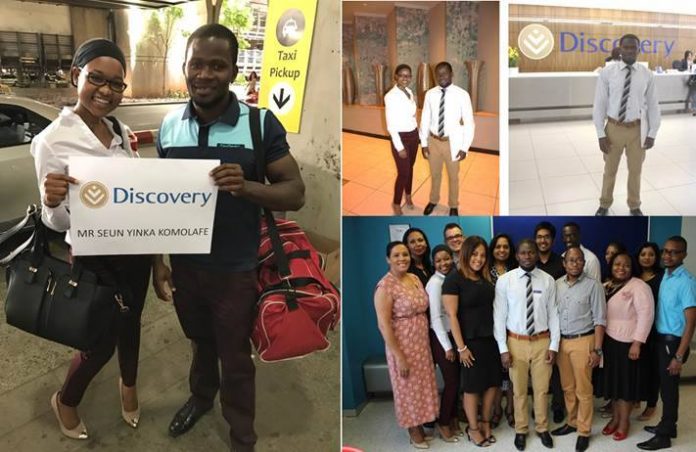 “This year Christmas seems to be filled with much joy and blessings,” these are the words of Seun Komolafe, the 31-year-old Kovsie Alumnus who holds an undergraduate degree in Actuarial Science, along with an Honours and a Master’s degree in Mathematical Statistics, all passed with distinction. However, he has been struggling to find employment. Komolafe has been standing on a street corner in Universitas, Bloemfontein, with copies of his degrees on a poster, desperately looking for any job.

Bloemfontein Courant has reported on Komolafe’s story almost two months ago and the reaction from readers and those on social media helped him set up interviews and finding a dream job.

The 31-year-old Kovsie Alumnus is over the moon as he relocated to Johannesburg to pursue a career as a data analyst at one of the country’s biggest Insurance Companies, Discovery Limited. Komolafe commenced his duties in this month.

Komolafe says he is grateful that his dreams are finally becoming his reality. “Growing up in dire poverty, being raised by a single parent in Nigeria I had always dreamt of a life where I would be able to provide for myself and my family” he said. Komolafe says he studied hard to obtain his postgraduate degrees, not knowing that looking for a job would be one of the biggest challenges he has  ever encountered in his life. Komolafe says as hard as it was, he never gave up on looking for a job.

Today, Komolafe is jumping with joy as work invested in obtaining three degrees is finally paying off. He says he is more determined than ever to work even harder towards building the nation, and being an example of how far one can reach because of hard work. – Katleho Morapela