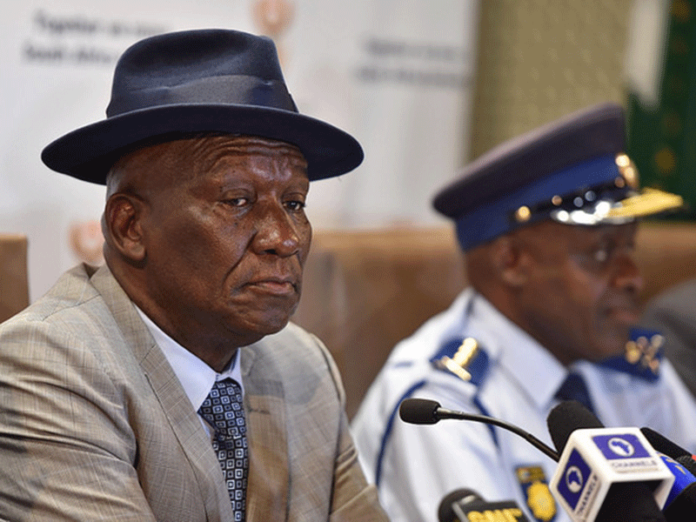 Mourners at the funeral of murdered University of Cape Town student Uyinene Mrwetyana heard how the man arrested for allegedly killing her burned her body before burying her remains.

Police Minister Bheki Cele addressed mourners gathered in East London in the Eastern Cape to bury the 19-year-old film and media student, allegedly murdered by a post office employee in Cape Town with a previous conviction for car hijacking. The 42-year-old man allegedly confessed to police after he was arrested, detailing Mrwetyana’s last hours before her death, said Cele.

“I’ve heard that there [are] other women he tried using the same modus operandi on. She went to the post office to collect a parcel and he told her to come back later. She returned… but began to realise there was a problem. I am not going to detail much, except that the man began attacking the young woman. She fought back… she fought back heavily.

“She fought, and for some reason lost her balance and fell. He then raped her. In the middle of that she rose again and fought. He then got hold of an object and bashed her to death. He said he realised what he did and went out to buy liquor and drink, because he didn’t  know what to do. He wrapped the girl’s body and put it into the boot of the car and took it to where he stays; he then burned the body, dug a shallow grave, and put her in it,” Cele said.

Another case of attempted rape against the post office employee was withdrawn, Cele said. The man had gone to visit his girlfriend at a nursing home, but found that she wasn’t there.

“So, while in the corridor, he sees a woman who had wrapped herself in a towel, seemingly from a shower, and started chasing her. Just imagine… he went to see his girlfriend, but starts chasing around another woman. That case was withdrawn.”

Cele said President Cyril Ramaphosa had instructed police to review all withdrawn rape and assault cases, especially against female students. He added that he would profile every male in South Africa if he was in charge of government.

“We do have a team specialising in these cases and it is one of the best teams in the country. That team has sent 4728 men for life in jail, but there are more than 4000 men out there doing this. If I was government, and not part of government, I would have said all men be profiled. So that just as you walk, people can know and say there goes a rapist… there goes a killer. Profiling so that we can know what kind of men walk, what kind of men walk around us,” Cele said.

The student had gone to a post office in Claremont in Cape Town to collect a parcel and was never seen again. The discovery of her body in Khayelitsha caused widespread outcry and condemnation, with social media users calling for the death penalty against perpetrators and a state of emergency against the femicide that has gripped the country. The man appeared in court on Tuesday and the case was postponed to November 5.

Cele told mourners that there was a continuing war against women in the country. He urged parents to raise responsible boys and not to teach them wrong things.

“One thing missing in this mess of macho boys that think they own everything about women, is a question of the family. We are not doing enough on that. There is a 13-year-old arrested for murder and a 12-year-old old arrested for rape. People rise and ask where are the police…. I think you should be asking where are the parents. At age 12 and you call for the police?

“Mothers and fathers tell us [boys growing up] wrong things and we believe we own everything thereafter. So this is a call to the most important organisation in the world, called family. We must make sure family leads so that we get good boys and men out of that organisation.

“My second call is to good men out there. In the midst of our anger, we must not forget that there are good men. All good people, including good men, must come together and isolate those rapists and murderers,” Cele said.