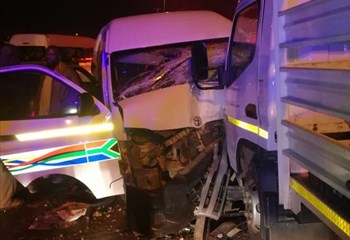 Twelve people were injured, two of whom seriously, when a taxi crashed head-on with a truck on the Meadows Road in Bloemfontein last night.

ER24 spokesperson Russel Meiring says emergency services arrived on the scene to find the taxi and truck in the middle of the road.

The passengers had already climbed out of the taxi and were found either seated or walking around on the scene.

Paramedics treated the patients and thereafter transported them to the Pelonomi Provincial Hospital for further treatment.

Local authorities were on the scene for further investigations. – OFM News

Bloem Hawks a force to be reckoned with