The Douw family home is surrounded by the beautiful rolling hills of Van Stadensrus, a small town in the south eastern Free State. However, the recently erected corrugated iron toilet makes the view less than picturesque. This is especially troubling as the family of four includes a wheelchair bound, Masabatha Douw.

Bloemfontein Courant visited the family after receiving a number of service deliver complaints from residents of the town. Douw needs the help of her 62-year-old mother Madithaba Douw, each time she has to use the narrow pit toilet held up by wire and sand. 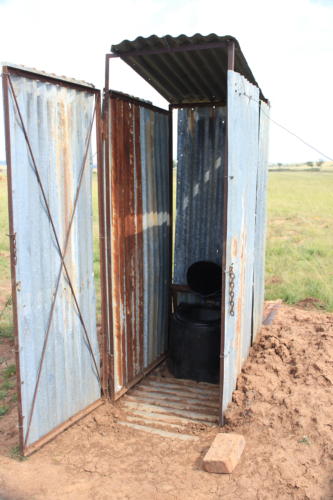 “It is a struggle to use that toilet and whenever it rains we struggle even more to use it,” said Madithaba. This may seem grim but it is the only toilet they have had after living in the area for the past four years.

Madithaba explained that the toilet was built in March. This comes after Masabatha had to use a hole in the ground right next to their shack to relieve herself. “It was not safe for her to go all the way to the back to do that so we just made a space for her here just for her to be more covered,” said Madithaba.

The family appealed to local councillor Olga Sewisa before the standing toilet was put up.

Van Stadensrus is reported to be affected by a number of other service delivery issues including failing sewerage systems and RDP woes. Sewisa expressed that the issues would be addressed at a community meeting but has yet to report the outcome of the gathering. Although she stated that sewage problems were being addressed.

The area although naturally beautiful does not yet have the infrastructure to accommodate the people of Van Standensrus. While many people are still waiting for their RDP houses to be completed others have built shacks in the meantime.

Outside the Douw house are other informal settlements and no roads making it difficult for a wheelchair bound person to move around. “We struggle everyday because she cannot just go to a clinic when she needs to. She usually has to be carried there,” said Madithaba. – Nomaqhawe Mtebele
nomaqhawe@mahareng.co.za