If you have ever wondered what it is like living in Gauteng and you yearn to hear untold stories of life in the City of Gold, then get yourself a copy of Gau-trained by renowned poet and art curator, Salome “Flow ” Wellington.
Wellington will be in the Rose City on Friday 6 April at the University of the Free State’s Library, from 14:00. Her visit forms part of a nationwide tour to launch and promote awareness about her new book, which she says took her about four years to compile.
“It was a lengthy project and I wanted it to give a truthful depiction of my experiences living in Johannesburg from 2011 up to now. It initially took the form of an autobiography but later became something more important: a guide for any migrant in the city,” the 34-year-old said. “More so, it tells the nasty truth about what people, and more so women, have to endure to make it in the famous ‘City of Gold’. Some poems are personal experiences since moving to Jo’burg in 2011, others are from observation,” Wellington said. 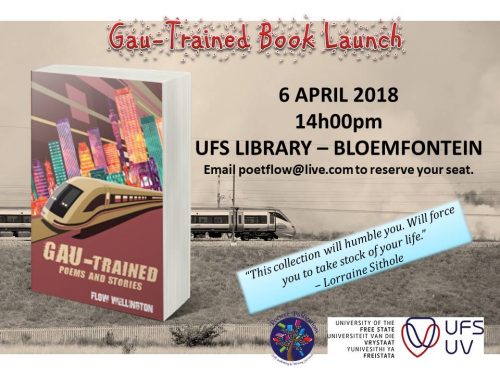 Topics covered in the book include xenophobia, racism, poverty and family. She added that she believes the book will particularly come in handy as a guide and eye-opener for those with ambitions of moving to Gauteng in search of a better life and success.
The title of the book is a play on the words “Gauteng” and “Gautrain” and this is to speak to how humans are changed because of life in Gauteng, which is not always a change they imagined it would be.
The book was first launched in Johannesburg on 24 February 2018 and now Wellington will be travelling to various major cities including Bloemfontein, Polokwane, Durban and Port Elizabeth to promote it.
Gau-trained is sold at R120 by Poetree Publications or can be bought from Wellington and also available from Bridge Books and African Flavour Books.
Wellington is a published author who has been in the literature industry for over 20 years.