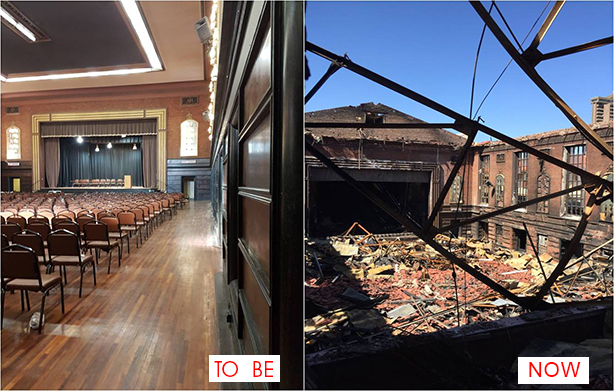 Several months down the line it appears that momentum and energy have been gained to move forward with repairs to the Bloemfontein City Hall.
Bloemfontein Courant spoke to Anton Roodt of Roodt Architects about the restoration of the City Hall and what the process entails.

The restoration project was handed over on Friday 2 March and they are set to start with the first phase of restoration close to the end of this week or early next week. “The first phase will take about six weeks to complete. The process of this phase entails for contractors to remove all the debris from the building and to search for all elements and details that should be kept safe. The most complicated part at this stage is that the asbestos be removed safely first,” Roodt said.
The second phase will allow architects and other specialists to enter the structure and do measurements and designs for the floor plan, the roof, the stage, etc. This is estimated to take one to two months and then the actual restoration process can begin. The City Hall should be completed by October 2019.
Roodt said that the community must remember that the restoration process entails a lot of work. It takes various specialists and artists to design, build and make various elements, including lights, handles, etc. The positive news is that there is no damage to the structure.
The City Hall as a whole was insured for about R200 million, but since only a part of the hall has been damaged, costs aren’t estimated to be of that value, but total costs are determined by the insurers.
“The aim is to restore the building completely so that the new building will look as close to the original building as possible,” Roodt said.
The City Hall went up in flames on 21 June 2017 after municipal workers had started a fire in the building during a meeting of the South African Municipal Workers’ Union (Sanwu).
The hall was originally designed by Sir Gordon Leith and built in 1935. It had a beautiful Italian-style interior with an attractive sandstone exterior and was widely known as one of Bloemfontein’s most exquisite historic buildings.
Courant will follow the restoration process and report on it as the time draws closer to the end of the various phases.