Much loved presenter and OFM stalwart, Lerato Lelia, is leaving the OFM airwaves to begin a new chapter in her life, leaving a huge gap in the hearts of her central South Africa listeners.

Lelia started her career in the OFM newsroom as an intern, but as soon as OFM General Manager, Nick Efstathiou, heard her speaking, he knew she belonged on the airwaves. She was then promoted to Programming Coordinator and Assistant Music Compiler. She also joined Enriko Klopper on air on The Trend. 20 months ago she became a presenter of her own weekday show, The Mid-Morning Magic, and was awarded the Bright Star Award at the 2018 Liberty Radio Awards.

Through all this she still remains a humble soul. “I never really think of myself as a household name really. I’m just a friend and I recognise how lucky I am to be able to go to work and ‘not work’. Being myself is my job, how awesome is that, it’s weird for me,” she said. 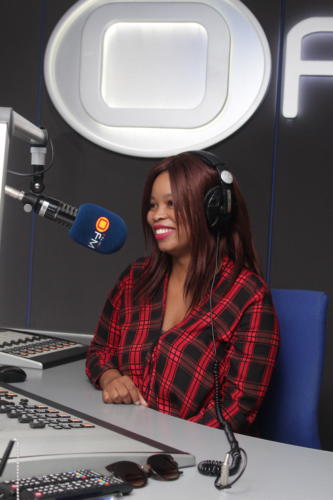 She admits that it took a little longer to find her purpose, while studying towards a second degree at Rhodes University. “From my very first radio show at Rhodes Music Radio I knew this is what I wanted to do, I was good at it, it felt easy and natural.”

Not afraid of a little hard work, she grabbed every opportunity and never looked back. “After graduation I approached every radio station I could think of and OFM called my name. Being a news intern helped me learn the value and skill of sourcing original local stories, I knew it was part of the bigger picture so I strapped down and I did the work. I was lucky enough to be supervised by people who wanted to nurture my potential and had as much belief in me as I did in myself, people who supported the bigger dream and still do! So that in itself was a gift. It moulded me into becoming a force to be reckoned with.”

Lelia is now heading off to Cape Town, where she’ll be settling in with her husband and three-year-old daughter. “It has been a wonderful experience to see Lerato grow and mature as a radio presenter. OFM has been lucky to have this vibrant young woman as part of our team and she will be sorely missed – by her colleagues and the listeners alike. However, I firmly believe that there will be many more new and exciting opportunities for her in Cape Town with her family and we wish her nothing but the best,” said OFM General Manager, Nick Efstathiou.

“My heart is sore because I am so going to miss the love I received from my friends on air. Oh my word, central South Africans have big hearts,” Lelia concluded. – Seithati Semenokane
seithati@centralmediagroup.co.za