Women in security services within the Ladybrand Cluster commemorated their Women’s Month by setting up a roadblock on the N8 between the Maseru Port Of Entry and Ladybrand.

Lt Col Diepo Nthako, the Ladybrand Station Commander invited women from the Traffic Department, SANDF members currently deployed at the borderline, Cross Border members, police stations within the Ladybrand Cluster as well as specialised units such as K9 and VISS (Vehicle Identification Section and Safeguarding) to form part of the roadblock in squeezing crime.

The main focus was stolen vehicles, illegal immigrants, dealing in drugs, human trafficking and to send a clear message to road users that violence against women and children will not be tolerated, and pamphlets to that effect were issued to the road users.

Huge numbers of traffic fines were issued for not abiding to traffic laws.

759 vehicles and 1 786 people were searched, while six people were arrested for contravening the illegal immigration act.

After the roadblock, members were treated to delicious sandwiches and cool drinks and Lt Col Nthako thanked the women for doing their part in the fight against crime. 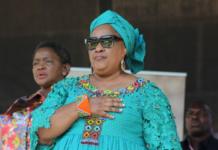 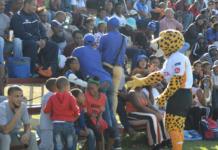