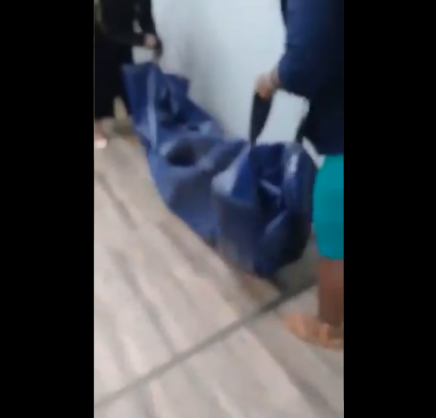 Two women have left social media users in both shock and admiration after taking a family member’s dead body to an Old Mutual branch after the company allegedly refused to pay out the funeral claim.

In a video that has been doing the rounds, two women can be seen picking up the body, in a blue bag.

The women can be heard saying that they only took the body to the branch because the bank “refused” to pay out the funeral claim.

Social media users were left in shock and angry with the bank for leaving the family in a position to resort to such actions to be heard.

Responding to the incident, Old Mutual said it had actually paid out the funeral claim and could not go into much detail as to what led to the situation. The bank said the claim had to undergo “further assessments”.

It said: “Good evening, this has been most unsettling and we are sympathetic towards the family during this difficult time. We can confirm that the claim was paid. Due to the sensitive nature of this matter, we will continue engaging directly with the family.

“We take note of this incident and would like to assure our customers that claims are assessed on an individual basis and the incident at this branch while isolated is regrettable. While we make every attempt to settle claims as speedily as possible, this specific claim had to undergo further assessments.

“Old Mutual strives to pay claims speedily – 99% of funeral claims are paid within 8 hours once all requirements are met.”

Watch the video below shared by @ConfessionWhite:

[EXPOSE OLD MUTUAL] Family bring their dead family member after @OldMutualSA refused to pay their policy benefit. Old Mutual’s arrogance is stinking now. What a shame! May the soul of the poor person Rest In Peace. Plz Retweet. pic.twitter.com/Gk2QFQWkoM