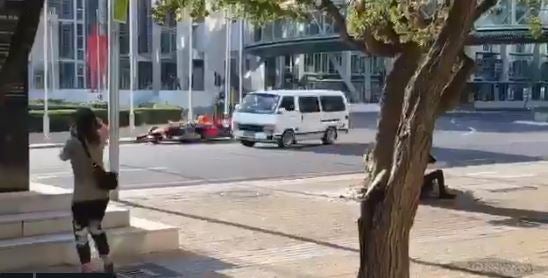 Footage of the taxi driver fiercely taking a curve with the roaring F1 RB7F1 on its tail is an eyebrow-raising feat. The duo then disappointingly end the race by taking separate routes. Although the taxi had no chance against the Aston Martin, we wonder what yellow lane tactics the taxi would have had to take in order to give the F1 car a run for its money.

Only in #CapeTown will you witness a taxi backing itself against F1 power. Local is mos lekka @redbull @THESTORMERS @CityofCT #CapetownCircuit #F1 @IOLsport @IOL @MaxVerstappen_ pic.twitter.com/kOF8WTAj5I

DJ Ready D and Ryan O’Connor of KFM were pumping the entertainment while the 13-time Formula 1 race-winner Coulthard spoke kindly of Cape Town during interviews.

#Coronavirus: SAA to suspend all domestic flights from Friday