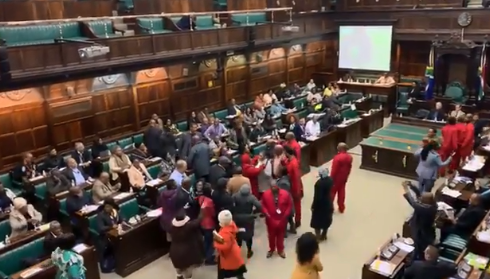 It was unclear why the two camps were at each other’s throats.

In videos that have been shared on social media by Democratic Alliance MP Phumzile van Damme, EFF MPs can be seen approaching another group of MPs, as Speaker Thandi Modise gets in the middle in an attempt to defuse the situation.

Other MPs take videos of the incident.

In the end, everyone goes back to their seats.

According to newly appointed EFF MP Naledi Chirwa, the scuffle broke out after EFF MP Makoti Khawula asked a question that did not sit well with ANC MPs.

She said: “Disclaimer: Mam’Khawula was asking a pertinent question and concern of how public participation should have an impact on bills. ANC members, with arrogance, felt it was okay to silence her. The constituency represented by Mam’Khawula will not be silenced and erased and we sit back.”

Watch the video below shared by Van Damme:

It’s training for new MPs. Training. But the EFF can’t help themselves. pic.twitter.com/AT7SzDYCZc

Mnisi happy to return to Cheetahs