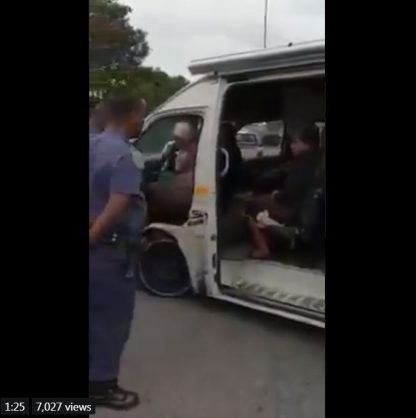 The commuters have also received a backlash on social media for ‘allowing’ the driver to put their lives at risk.

A video that has been circulating on social media has left South Africans in anger after 25 people – excluding the driver- got out of a Toyota Quantum after the taxi was stopped by police officers.

One of the commuters even lashes out at the cops.

While some blamed the driver for this insane behaviour, others say commuters should also tell the driver to stop putting their lives at risk.

User @Tshepo said: “People this is very dangerous, 25 passengers. Our people are not scared to die. These drivers will never respect lives if we don’t teach them how to. Better to arrive late than dead,” while @JabulaniLight said: “You bro I’ve realised it’s us passengers who are promoting this , even when a taxi full we still persists pack and cramp each other like a bunch of livestock.”