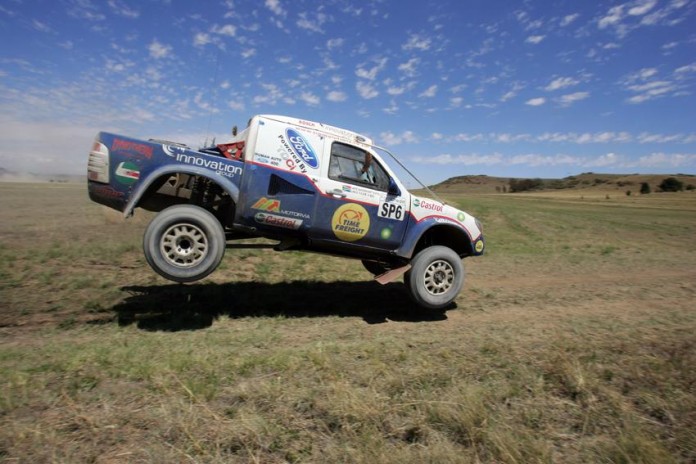 Ford Racing’s former South African champions, Chris Visser and Japie Badenhorst, made sure the Production Vehicle championship stayed alive when they won the Human Auto 400, the penultimate round of the Absa Off-Road Championship at Black Mountain in Thaba Nchu.
Visser and Badenhorst (Ford Racing Ranger) scored their second win in a row when they held off a fierce challenge from championship leaders Duncan Vos and Rob Howie, in a Team Castrol Toyota Hilux.
Visser and Badenhorst, who started the day a second ahead of Vos and Howie, finally stretched the gap to 36 seconds. The two frontrunners set a hot pace and were nearly five minutes ahead of third placed Anthony Taylor and Chris Birkin, in a second Castrol Toyota Hilux.
At the end of the first of the 170 kilometre loops that made up the race the gap between the Ford crew and Vos/Howie was only seven seconds. A fascinating cat and mouse game was played out over the second loop with Visser and Badenhorst holding their nerve under intense pressure.
The SA Warranties Navara of Archie Rutherford and Paralympic swimming legend Natalie du Toit ended tenth. It was a second successive top ten finish for Rutherford with a sporting celebrity sitting alongside him.
“It was an awesome experience,” said du Toit afterwards. “Two punctures on the first lap hurt us, but we were 10 minutes faster on the second loop and a top ten finish was great.”
The Class D battle produced a popular win for Mpumalanga brothers Johan and Werner Horn in the Malalane Toyota Land Cruiser.
A sixth win in seven outings saw Dirk Putter and Koos Claasens (4×4 Mega World Toyota Hilux) wrap up the Class E title.
After prologue problems Bloemfontein crew Gerald le Roux and Hendrik Badenhorst fought back to take third place in the Ruwacon Ford Ranger.