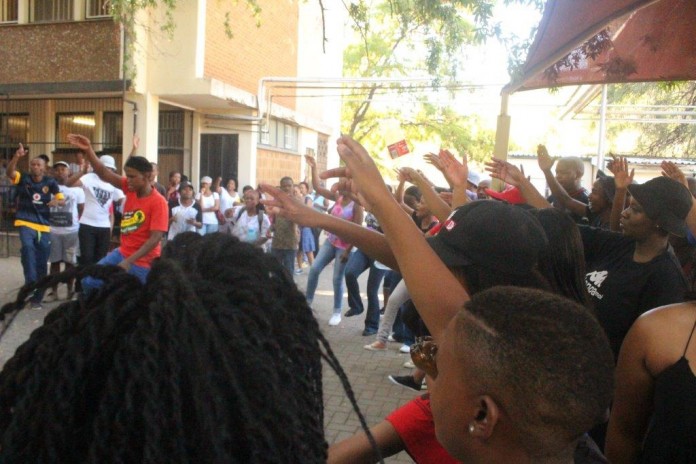 Striking nursing students’ shutdown of the Free State School of Nursing’s (FSSON) Bloemfontein Campus mean Bloemfontein’s public healthcare facilities have been running on skeleton staff since Monday.
Students from the FSSON say they will continue their protest action until the department pays their outstanding monthly stipends for January and February, and the strike might be extended to the institution’s other campuses. This could potentially cripple the provincial public health system, as student nurses make up a large contingent of nurses working in hospitals, while being supervised by qualified, registered nurses.
According to outgoing FSSON SRC member, Tshepo Seemahale, some students have been unable to even purchase the bare necessities, as they are dependent on the stipends ranging from R2 100 to R3 200 per month.
“How are we expected to eat? How can we maintain hygiene while working with patients, when we can’t even buy soap to wash ourselves?” Seemahale asked on Tuesday morning.
Meanwhile, provincial Health Department spokesperson, Mondli Mvambi, has promised the outstanding stipends would be paid by today. He accuses the students of jumping the gun by resorting to strike action.

How can we maintain hygiene while working with patients, when we can’t even buy soap to wash ourselves

The department also says the students themselves should shoulder some of the blame, since they were slow in submitting their final assignments in the previous academic year. This led to their registrations for 2016 being late, and the department being slow in processing their registrations
“We are improving the system to make sure it doesn’t continue into other years. They must also play their part. Their part is this: We have processed their submission. They are getting paid on Thursday. We are promising them. This is not a spaza shop. This is a government. We want them back in their positions and if we have not paid them by Thursday, thén they have a reason to protest.”
Mvambi says following the department being placed under administration in 2014, they have tightened up protocols to ensure only registered students get paid and ghost-workers are eliminated from the system.
“Our aspirations are to make sure that while services are provided, you get a clean audit at the same time. You can’t just pay people until everything has been submitted.”
The protesting students resolved not to return to classes or wards until they have seen the money deposited into their accounts. – Earl Coetzee
earl@centralmediagroup.co.za