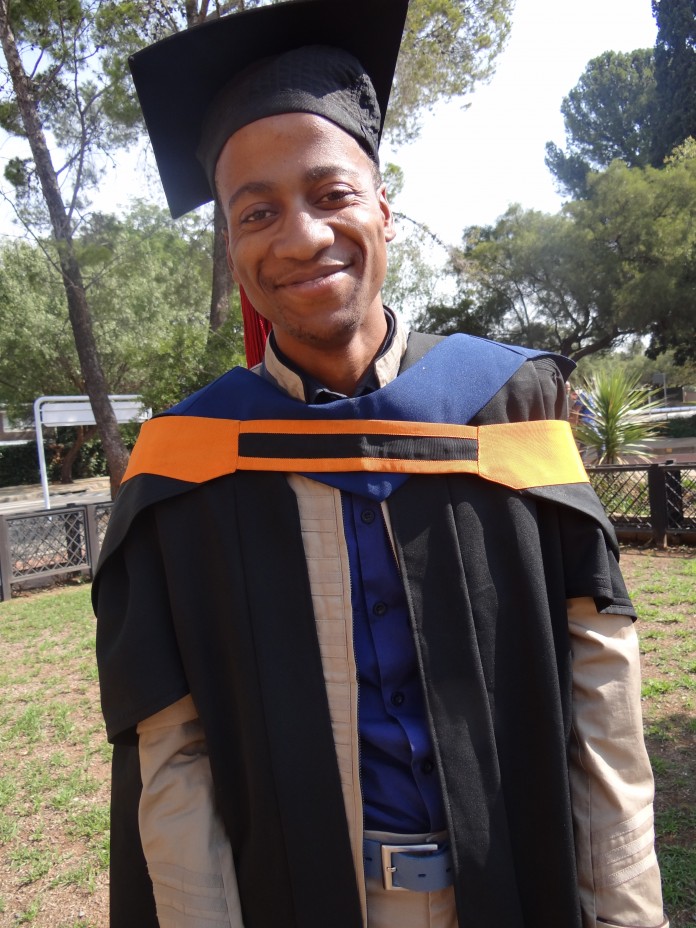 More than 3 500 students from the University of the Free State were rewarded for the hours spent studying and toiling throughout their three to five years on the campus, during the autumn graduation ceremony this week.

Some described their graduation as the single most important day in their lives, relaying stories about overcoming hard times and showing true grit.

Trevor Shaku is one such example.

This Media Studies graduate received his Post Graduate Certificate in Education (PGCE) during the first round of graduations for the year at the UFS.

Shaku learned the meaning of sacrifice when his father, the family’s sole provider, was retrenched from the De Beers Cullinan diamond mine, North East of Pretoria, in 2006. He became a farm labourer in the area, while his family survived on maize, grains and other food the farmlands provided. His grandmother’s social grant also helped to supplement the family’s meager income.

When Shaku was accepted to study at the UFS, his unemployed mother borrowed money from family and friends in order to pay for registration fees, food and accommodation to start off at university.

Soon after arrival, he became aware of the National Student Financial Aid Scheme (NSFAS), whose funding helped him to stay in university.

Trevor says he was determined to better himself to provide for his family, after receiving his degree. “I wanted to finish and start supporting my family, so that’s what kept me going and studying further” he says.

Being the second youngest of eight children and the first in his family who has managed to go to university, his goal to only receive his undergrad qualification and then support his family soon changed.

“Once inside the university you begin to learn that there’s more knowledge that one needs to accumulate. So it becomes an inspiration for future goals”.

Trevor believes the tertiary experience has come with lots of life lessons, besides everything else he has learnt in class.

The 22-year-old decided to pursue his PGCE diploma because he would like to be a teacher one day.

After completing his Honours degree in History at the end of the year, he would like to pass on the knowledge he has gained by being a History or English teacher. – Moeketsi Mogotsi/Courant News