The University of the Free State has recently presented its biggest virtual graduation ceremony during which certificates, diplomas, bachelor’s degrees, honours degrees and postgraduate diplomas were conferred upon graduates.

The graduation ceremony took place from 19 April 2021 to 22 April 2021. Not only has this been the biggest virtual ceremony the institution has held thus far, three honorary doctorates were among the qualifications conferred. Receiving their doctorates were Dr Rudolf Johannes (Dolf) van Niekerk, Justice Zakeria Mohammed (Zak) Yacoob and Dr Sipho Mila Pityana.

Dr Rudolf Johannes (Dolf) van Niekerk has a rich past with work that includes 27 books in the field of philosophy, poetry, fiction, drama, and memoirs, for which he has received numerous awards. 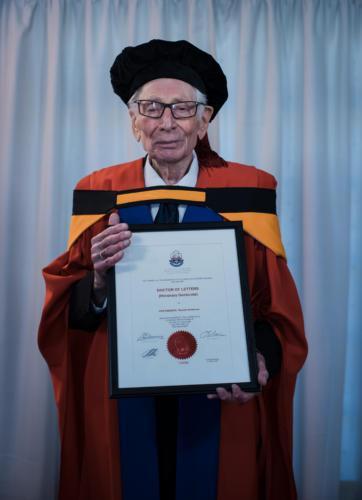 Justice Zakeria Mohammed (Zak) Yacoob served as judge of the Constitutional Court of South Africa from 1998 to 2013 and became nationally and internationally known for his contribution to the socio-economic rights jurisprudence of South Africa.

Dr Sipho Mila Pityana is an acclaimed business leader who has a passion for education, which has seen him serve as Registrar of Fort Hare, Chairperson of NSFAS as well as the Chairperson of the University of Cape Town Council.

According to Rector and Vice-Chancellor of the UFS, Prof. Francis Petersen, this is their fourth virtual ceremony. They remain humbled and inspired by the grit and courage of all graduates who pushed forward in this new, extraordinary world. “Although you may have felt uncertain about the future at times, you refused to give up – and instead, you boldly crafted your own destiny,” said Petersen. He added he was looking forward to seeing the graduates grow into the leaders of tomorrow.

The graduates hail from the Faculties of Economic and Management Sciences, Education, Health Sciences, The Humanities, Law, Natural and Agricultural Sciences and Theology and Religion.

Just over 7 900 qualifications were awarded to students across all campuses, including 251 Master’s degrees and 43 Doctoral degrees.