An oncoming Toyota Tazz flashed its lights, signalling the driver of the Polo to stop.

Immediately after he stopped, four armed occupants in the Tazz approached him and instructed him to get out of the car.

They then loaded him into the boot, and later dropped him off on the Dewetsdorp road.

In the other incident, the driver of a Toyota Stallion was approached by two armed men, while he was waiting for a friend in Douglas road.

The hijackers dragged him out of the vehicle and sped off. No arrests have been made in both incidents. 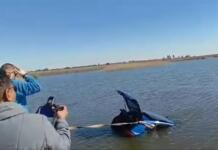