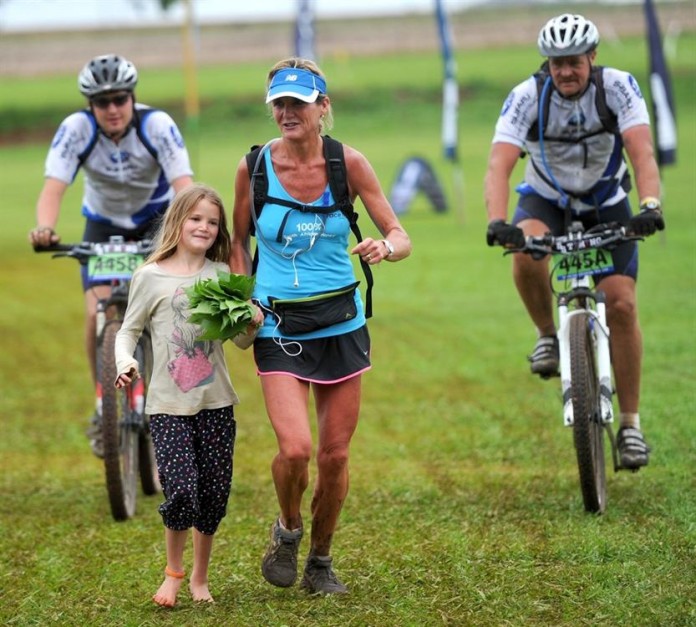 Top KwaZulu-Natal trail runner Tracy Zunckel outpaced a few cycle riders in the recent FedGroup Berg & Bush near Winterton to raise funds for protecting rhino and other species in the Spioenkop Game Reserve.
Zunckel, who is part of the local Bergville farming community, ran the mountain bike stage race trails to collect donations towards replacing the damaged game fence surrounding the cash-strapped reserve.
She was approached by race organiser Gary Green following her participation in last year’s event, which saw them raise R25 000 for the Bergville Orphan Fund.
According to the five-time Mont-aux-Sources Challenge champion, she immediately jumped at the opportunity to run for a cause and withdrew from another trail run in which she had been scheduled to compete.
“It’s awesome to be able to use my God-given talent to help out in our community. It’s my privilege to run this race and to live in this spectacular part of our country.
“We as a community have a responsibility to preserve and improve it for generations to come.”
Zunckel, who races for sponsor Wedgewood, said it would cost an estimated R20 000 per kilometre to replace the fencing. The organisers opened the fund with a R25 000 donation.
“Spioenkop has giraffe, zebra, rhino, eland and a multitude of other animals. It provides recreation for a lot of locals and visitors to the Ukahlamba Drakensberg area.”
The 38-year-old ran the final days of both the three-day Descent and Original two-day events, finishing last in the former and beating more than 80 social riders in the latter.
Zunckel, who is also a two-time winner of the Rhodes Trail Run and Mutter Mountain Mania Ultra Trail Run, started at the back of the field and finished the 50km stage in four hours and 17 minutes.
Donations can be made to: Berg & Bush, Standard Bank Ladysmith, branch code 057725, account number 060 191 570.
For more info, visit www.bergandbush.co.za or find the event on www.facebook.com/bergandbush and @bergandbush.