Described as an encyclopaedia of world recognised writing, directing and acting on the stage, Athol Fugard’s The Shadow of the Hummingbird is tagged magical and phenomenal and will be staged at the Performing Arts Centre of the Free State (PACOFS).

PACOFS Arts Director Jerry Mofokeng says the moment Athol Fugard went on stage was a magical moment which no words can explain.
“It is a magical moment. The moment he went on stage, the audience got up and applauded. At 81 years of age, he is still phenomenal. It is magic and a miracle on the stage which words can’t explain,” he says.

Fugard, who returns to the stage this year after an absence of 15 years, continues to explore the nooks and crannies of the human heart with wry humour and pathos in his love inspired production.

In regards with his take on the play, he says “Athol Fugard sitting in his study in Southern California sees a shadow of a hummingbird, which suddenly runs away immediately, and he focuses on the shadow itself. But what does a shadow represent? It is a glimpse of the real thing and the question is what thing in life do you want to see shadows of.

Once you get to the real thing, what happens to the imagination in your head, mind, soul, spirit? In the play, you get this old man who in his study chasing these shadow which he wants to hold and when he finally gets hold of the shadow, the story unfolds.”

The Shadow of the Hummingbird is inspired by Fugard’s relationship with his own grandson, Gavyn, this intimate play has deep autobiographical roots. It is also a play about love, as Fugard notes, “This is the most naked statement I have ever made about that mysterious emotion.”

Mofokeng says the play will run for a short season, from next week Wednesday, August 20th and it’ll end on Saturday, August 23rd. There will be two shows on Friday and Saturday. The time for the show is 18h30. 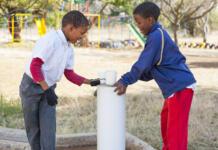