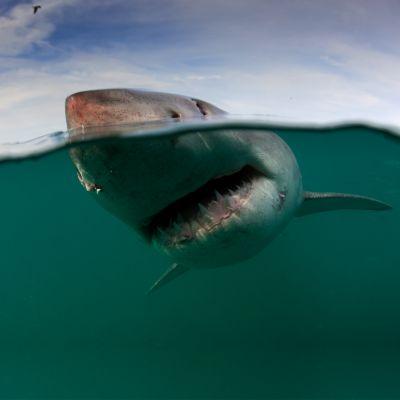 Sharks have for a long time carried a reputation for being aggressive. How has this changed over the years and how is the tourism industry benefiting?

In 1992, a cageless shark-diving expedition off Dyer Island, Gansbaai in South Africa was the world’s first recorded intentional cageless dive with great white sharks. This contributed to a change in perceptions about the fearsomeness of these beautiful sharks.

The cageless dive took place during the filming of the National Geographic documentary Blue Wilderness. After a period of six hours with 7+ Great White sharks around the boat, four scuba divers did the world’s first dive amongst these sharks without a shark cage. The divers were Ron and Valerie Taylor, pioneers of underwater exploration, a friend George Askew, a diver and photographer, and Piet ‘PJ’ van der Walt, who founded the South African shark cage diving in Gansbaai in 1988.

All four divers, who are recognised shark experts, were testing a hypothesis that the great white shark had a reputation that they may not deserve. With years of experiences with different species of sharks, George Askew, one of the four divers, had written an article “The Jaws fish – Myth or Maneater that proposed that Great White sharks did not deserve the reputation Jaws author Peter Benchley and film director Steven Spielberg had created. Askew postulated that, because they rely on stealth and surprise when attacking, Great Whites would be unlikely to attack if one was  aware of their presence.

Whilst testing the Shark Shield for the Natal Sharks Board, the divers discovered that sharks, despite many hours of chumming were cautious. After some time, the divers had timid encounters with the cautious sharks and were never at any time challenged, nor made to feel uneasy. This event challenged the idea of the Great White as a “Mindless Monster” eating machine and changed the way the world viewed sharks.

Just before the Gansbaai great white dive, Askew and Ron Taylor were on the dive platform a few millimeters above the water, filming underwater using their hands to hold the cameras. Askew stood up, and at that moment a large Great White slid onto the platform and stopped 2 inches from his foot before sliding back into the water. The large shark did not snap or lunge at him.

That first close encounter dive shows that Great White Sharks are very curious and can be quite ‘playful’. This dive is responsible for the upsurge in Shark Tourism in Gansbaai. When existing shark cage diving operators in Gansbaai and around the world learnt the Great White was quite approachable and not likely to attack, it was hypothesised that the same applied to other dangerous sharks such as tiger and bull sharks. This proved 100% correct and shark tourism began to take-off. It is now a multibillion-dollar a year industry and has provided data which is used by scientists for research and the conservation of sharks.

Since this dive, divers all over the world, have attempted cageless dives with big sharks. However, such attempts are not recommended as sharks are still Apex Predators and very opportunistic. Although there have never been any serious incidents from free-swimming with Great Whites, the same cannot be said for other sharks.