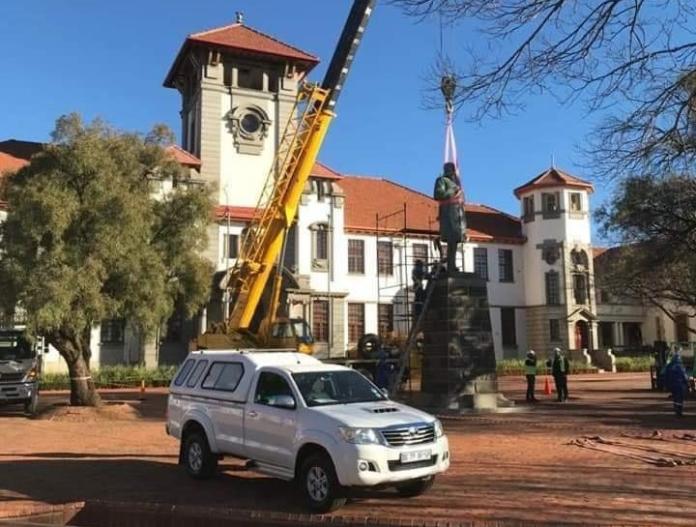 The statue of MT Steyn has been removed from the University of the Free State main campus this weekend. This comes after the permit committee of the Free State Provincial Heritage Resources Authority (FSPHRA) issued a permit to the university earlier this month to dismantle, store and relocate the statue to the War Museum in Bloemfontein.

According to Rector and Vice-Chancellor of the UFS, Prof Francis Petersen, the statue may be relocated to the museum within a week once an agreement is reached between the two entities.

The statue was dismantled in front of the main building on the UFS Bloemfontein campus on Saturday. According to Prof Petersen, the permit committee thanked the university for its sustained diligence in pursuing the matter in line with best heritage practices.

“There is no precedent for such a process under current South African legislation, and I am pleased with the way in which it has been concluded. We will now proceed to reinterpret the site in front of the main building into a symbolic, inclusive public space that advances nation building and social cohesion,” he said.

“The university’s special task team excelled in putting together a comprehensive conservation management plan, and I would like to acknowledge them for the remarkable way in which they facilitated the entire process up until now,” added Prof Petersen.

The provisions of the permit stipulated that the university must prepare a conservation management plan that will address the process undertaken to relocate the statue. This includes indicating the team to be appointed for the dismantling, temporary storage, and re-assembly of the statue at the War Museum. It also requires details of the heritage architect who will be appointed to oversee the process as well as that the wishes of the Steyn family should be accommodated.