While the critics of the Free State provincial government have labelled the launch of a school in Grasland, Bloemfontein, two weeks ahead of the national general elections as another political move, the community which received this new state-of-the-art facility is grateful.
The MEC of Education in the province, Tate Makgoe, beamed with pride as he cut the ribbon on Tuesday at the launch of the Grasland Secondary school, which is said to have cost over R57 million and created about 174 jobs during its construction.
Speaking to various stakeholders at the launch, including members of the Grasland community, Makgoe urged the learners who will now be allotted to the school to use every opportunity to better themselves so that they may have a brighter future.
“If you use this sharp weapon called ‘education’, you can determine where you are going,” Makgoe said in a heartfelt speech to the learners. 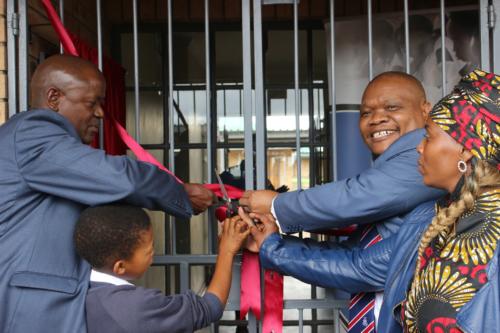 It took the department almost four years to complete and now boasts 24 new classrooms, an administration block, a library, four labs for mathematics, science, computers and biology, and a research facility, to mention a few.
The school also has a hall, which Makgoe said could double as a space community members could utilise to hold their public meetings and consultations at the hall. He, however, requested that the community jealously guard the school and its facilities from criminal elements.
Meanwhile, the spokesperson at the provincial department, Howard Ndaba, said that the school has now placed more than 450 learners at the premises and will over the course of the next four years introduce a new grade.
“We expect that by the year 2023, the school will have a grade 12 class,” Ndaba said. Ndaba also said Makgoe will over the course of the 2019/20 financial year also open more schools across various parts of the province. This opening was a collaborative effort between the provincial government as well as the provincial education and public works departments.
Also read “MEC opens school office in Mpatleng” on page 13.