The popular story of Sleeping Beauty has been rewritten, oozing South African flavour, added characters and special plot twists to bring a show like no other to the people of Bloem.
Some of Bloemfontein’s talent have gathered to bring a show thrilling with extravagant costumes, dance, character, décor and lots of laughter. This is according to actor, singer, dancer, director and choreographer, Xander Steyn. Steyn is well-known across the country for his work and according to him, the mission of Xander Art Productions is to give everyone the opportunity to be part of such a big production. “The show is filled with locals who have normal jobs. My classes are like therapy for many and we do two big productions annually,” Steyn added.
“I’m astounded at the local talent Bloemfontein has. These people are not professional singers, dancers and actors. We have teachers, plumbers, administrators and students…people from every part of the corporate world.” Some of the cast members include Nicole Viljoen from Radio Rosestad who will be playing “Mallervirsand” (Maleficent) and Brendan Peyper who will play Prince Flippen Charming.
According to Steyn, people can look forward to a whole new take on this old fairy tale. In an interview he told Bloemfontein Courant that Sleeping Beauty has a twin sister… but does not want to give everything away.
Steyn has had successful plays such as Aladdin, Snow White & the 7 tsotsis, Robin in the Hood, Cinderella and Alice in Wonderland and will be writing, directing, producing, and choreographing his latest musical.
The musical will take place on Saturday, 16 November at 14:00 and 19:00 at the Sand du Plessis Theatre. Tickets are available during office hours at Pacofs’ ticket office – corner of Markgraaff and St. Andrew’s St. at R100, R120, and R150. – PIERCE VAN HEERDEN
pierce@mahareng.co.za 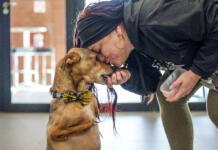