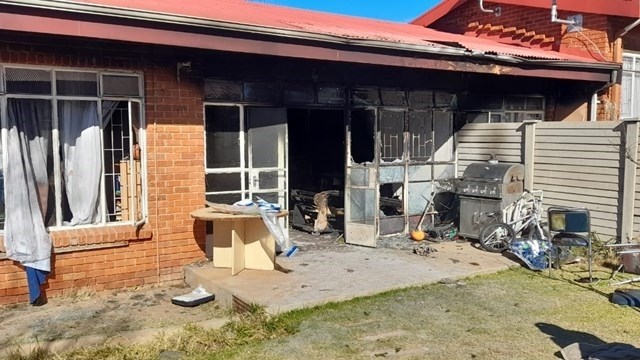 The sister of Cindy Kagande, who died with her husband and kids in a family tragedy, says her heart is broken and the situation is too difficult to talk about.

“I don’t want my name in the media. We do not want to talk to reporters, because they ask too many questions and we do not have the answers,” she stated in the interview, OFM News reports.

She said they were four sisters and one brother and she was four years younder than her sister, Cindy.

Cindy’s body and those of her husband, Terry and two teenage children – Isiah (13) and Jade Leonard (17) – were found exactly a week ago at their house in Willows in Bloemfontein.

“I spoke to Cindy on Wednesday evening (last week Wednesday) and everything seemed allright. There was no indication that something might be wrong,” she explains.

The bodies of all four members of the family were discovered last Thursday morning when the police were called out to a house that was on fire.

“I was in shock the very next day when the caretaker of the complex phoned me. He said your sister has passed away. I told him I have two sisters in Bloemfontein, so he will have to be specific. That’s when he said your sister Cindy and her family…”

The family had a memorial service for Cindy and the kids in Bloemfontein this week, and they are now headed for Graaff Reinette.

Given the brutallity of scene as set out in the official statement of the police, Cindy’s sister says she is not angry when trying to piece all the puzzle together of what happened that fateful night. “No I am not angry, I am just sad… so sad,” she sighs.

She confirmed that the family met with the police and is now awaiting the final report as the investigation is still ongoing.

“Cindy was a friendly and kind person. She never judged and never looked down on anybody. She was always ready to help even when it means sharing the little she has… we were very close and it is hard for me to talk about this,” she whispers.

The bodies have been released to the two families after the outopsies were conducted. Cindy and the children are going to be cremated.

Attempts by OFM News to make contact with Terry’s family have been unsuccessful.