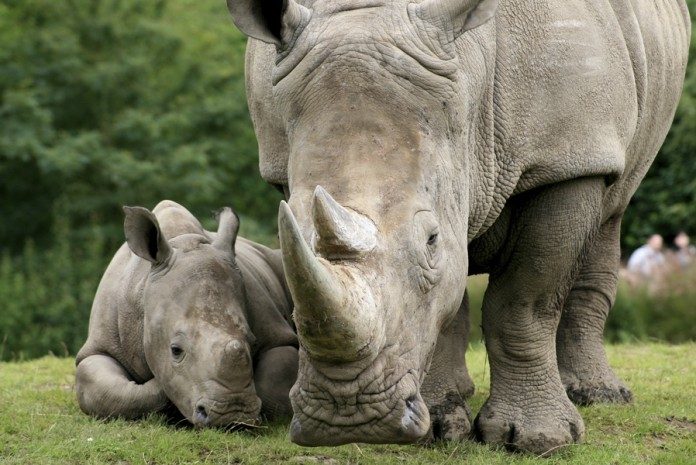 The horns of two rhinos at the Bloemfontein zoo, which were dehorned without the city manager’s permission, have still not been recovered. Two senior officials from the zoo were suspended last week, after it was discovered that they had undertaken the dehorning process of two rhinos without obtaining official authorisation from the city manager, Advocate Tankiso Mea.
Mangaung spokesperson, Qondile Khedama, stated that the owner of the assets, in this case the rhinos, is the Mangaung Metropolitan Municipality, and as the accounting officer, the city manager has to be informed of the process of dehorning before it is done. The city manager should also be made aware of the storage of the horns.
No arrests were made, but a case was opened by the police. Police spokesperson, Chaka Marope, said a case of contravention of the Animal Protection Act and theft had been opened. Meanwhile, an investigation is underway and the municipality will act on the basis of the outcome.
World Wildlife Foundation (WWF) South Africa, Rhino Programme Manager and a wildlife veterinarian, Dr Joseph Okori, said that when rhinos are dehorned there is about a 5% chance that they could die due to being sedated. “You cannot know if the rhino has an underlying medical condition that could cause it to succumb. There are also risks in that if the dehorning is not done professionally the rhino can get infected. In many cases those doing dehorning are vets, so the risks are very low,” he said.
Okori added that with dehorning the horns usually grow back at about 3 to 4 inches every year, which means you are looking at total regrowth every 3 to 4 years, so you have to dehorn again and again. Okori said that dehorning then becomes expensive and increases the risk of death from frequent exposure to sedation.
Ban Animal Trading, an animal rights organisation that exists to end animal exploitation through facilitating positive and meaningful change, had this to say: “It appears that zoos are now soft targets, guessing just about zero security, so, easy pickings. Two zoo officials were suspended. Suppose they can’t be charged for lack of evidence?”
Conservationist agree that for dehorning to be effective, it must be coupled with extensive anti-poaching security and monitoring efforts. With an absence of security, rhinos may continue to be poached, regardless of whether they have been dehorned. – Seithati Semenokane
seithati@centralmediagroup.co.za