An anonymous truck driver has claimed that the Rocklands Shopping Centre has become a dangerous place to deliver goods after he had allegedly been attacked by armed men on the premises. The shopping centre in Moshoeshoe Street alongside Kagisanong Police Station has seemingly become a hotspot for opportunists who rob drivers of groceries and appliances among other products during routine deliveries to shops.

The driver, who does not want to be named, said that he has been robbed seven to eight times since September 2017. He claims that he has fallen victim to groups of about nine men who steal deliveries while armed with knives. The driver has since had to pay for the stolen stock out of his own pocket as neither the company he delivers for nor the centre’s management take responsibility for the goods. 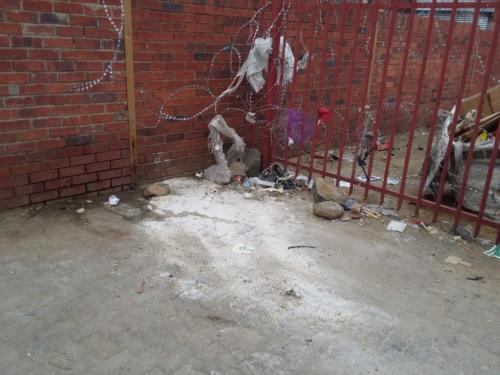 Bloemfontein Courant visited the centre where security personnel stated that some truck drivers do not offload in designated and safe areas. Security claimed that drivers often leave trucks full of products unattended and leave food items on the floor in open spaces accessible to alleged thieves. They also emphasised that delivery in the area in question was the responsibility of Shoprite, however, police have been made aware of the occurrence of crime at the centre. The truck driver said that police have registered a case of theft after the incidents.

Bloemfontein Courant also found that the delivery area where drivers often offloaded food items was unsanitary as garbage and stray dogs were commonplace. The delivery area is situated alongside a dumping site.

Shoprite Regional Manager, Goodenough Chobokoane, could not be reached for comment by the time of going to press. – Nomaqhawe Mtebele
nomaqhawe@mahareng.co.za