Following reports of water leaking from the ceiling at in the paediatric and maternity wards at National Hospital, Democratic Alliance’s Ward 18 Councillor, Dave McKay, has laid a complaint with the Health Department.

McKay sent Bloemfontein Courant photos showing puddles of water on the floors, with buckets and blankets being used to try and maintain the situation. “It’s beyond in humane conditions that children and their parents are expected to recover in. There aren’t’ enough beds, the ceilings are broken and falling in, the hospital is very unhygienic, especially for a maternity ward,” he said. 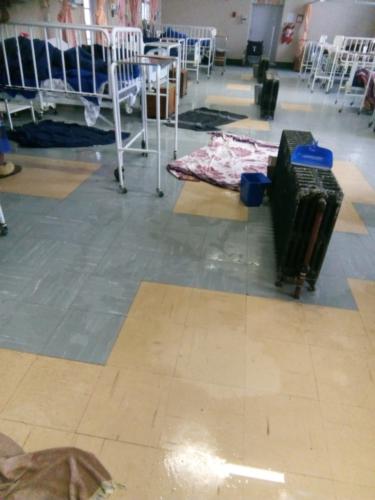 McKay added that the staff and patients are the ones suffering the most from these conditions, which are not only a health risk but are highly dangerous too. “I contacted our MPL, Marietta Pittaway, to try to find a way to solve this matter. She then contacted the Health MEC and HOD regarding the matter,” he said.

Marietta Pittaway, who had reported the matter to the Health Department, said, “They told me that they also received the report from the hospital and that the CEO is busy addressing the matter.”

Spokesperson for the Health Department, Mondli Mvambi, said that there were no pipe leakages at National Hospital. “What happened is that there was a contractor working on the second floor, stripping ward 6. 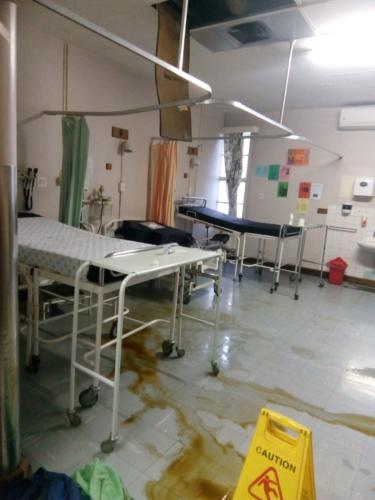 It is recorded that two hours after they had left, water started dripping from the ceiling of Ward 4 and the Maternity Ward, which is situated right underneath Ward 6. On investigation of the reported incident, we found that all taps were open, so we closed them and the problem was contained. No damage was incurred to the mattresses and no patients had to sleep on the floor as it was alleged by the DA,” he said.

“These underhanded tactics of public disinformation are highly unethical and fake news needs to be halted because it serves nothing but to undermine the confidence of our people on public institutions that provide the much needed services they depend on,” he added.