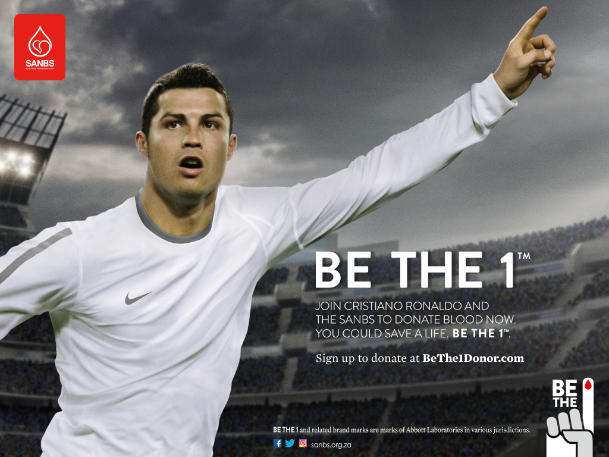 The South African National Blood Service (SANBS) has rallied behind international movement BE THE 1TM Donor to inspire young people to become life-long blood and plasma donors and help save lives.

This international movement was conceptualised by a global healthcare company, Abbott, which has partnered with Cristiano Ronaldo in an effort to respond to the global decline in the number of new and young donors.

Ronaldo started donating as a 24-year-old when he witnessed one of his teammates battle with the search for a stem cell donor for his ailing son. Seven years later he is still giving blood regularly.

Currently, South African tertiary students and learners contribute about 40 percent to the national blood reserves – and supporting them to continue this as a life-long commitment is an important objective for the SANBS.

A recent SANBS study conducted to determine the motivation behind the youth’s choice to give revealed that there was no powerful single-minded call-to-action for them to identify with.

Youth who took part in the SANBS research recommended that the blood service should involve recognisable influencers in order to personalise the brand for them.

These requirements are met well by BE THE 1TM Donor Movement. It is built around football icon and committed blood donor, Ronaldo who represents goodwill and is admired by young people, but also employs emotive messaging that resonates with the younger generation.

“SANBS is proud to be part of this movement and we hope that it will not only put blood donations on the agenda for discussion among young people but that it will also cause them to take a look in the mirror and say: ‘I have the power to save lives and I am going to use it’,” says SANBS Marketing Manager Silungile Mlambo.

The South African campaign, which launches on 17 October, will recruit local ambassadors to join Ronaldo including students and radio and TV personalities. They will take part in awareness-raising activations and be prominent on social and traditional media platforms to spread the word and support the global movement across South Africa.

“Our donors may or may not have such personal reasons for donating as Ronaldo, but our activations aim to remind young donors that someone they might never meet needs their blood and plasma right now,” concludes Ms Mlambo.

BE THE 1TM Donor Movement

For many in need of blood donation, finding that perfect match isn’t easy. It goes far beyond blood type. That’s why every person who donates blood is unique and special. Your blood could be one of a kind. Blood donors can be the single person of the 7 billion on the planet, needed to save another human life. Like Cristiano Ronaldo, inspire and motivate your friends to donate blood and help them realise the profound impact they can have on someone’s life. Join Ronaldo and SANBS to donate blood now. You could save a life. Join the movement on Facebook or sign up to donate at BeThe1Donor.com.