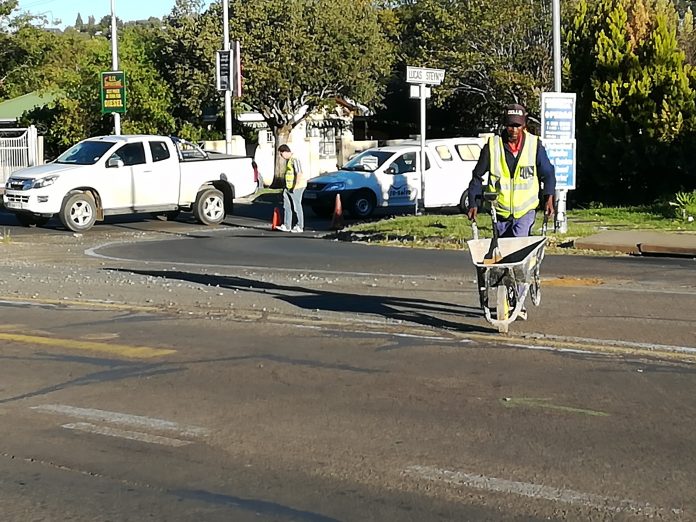 It is clear that the increasing amount of potholes on the roads of the Mangaung Metro is driving motorists crazy. During the past few weeks Bloemfontein Courant’s telephone rang off the hook as residents called to complain about the bad state of the roads in Bloemfontein. 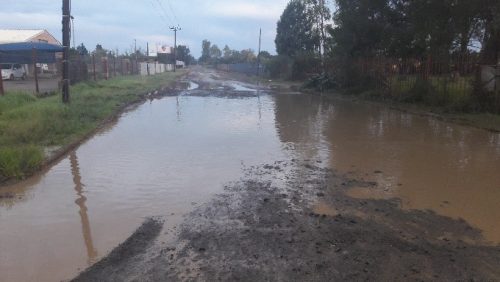 Elna van der Walt who lives in Lucas Steyn Street, said she is not happy about the potholes in her street. “After the recent rains, Lucas Steyn is full of terrible and dangerous potholes. At the robot where there are two very deep holes that can cause accidents.” She said it is almost impossible to drive around the corner and to miss both potholes. “Last Friday I stood outside in my garden, when a 4×4 drove through the potholes, resulting in one of its tyres bursting.”
She added that her gardener and her son immediately ran to regulate the traffic and they also tried to fill the holes with gravel. “Unfortunately it wasn’t long before there was no gravel left in the holes. The safety of motorists is very important and something has to be done about this situation.” 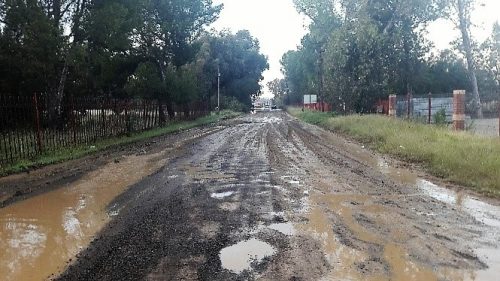 In Bardenhorst Street, Universitas, all the pipes were replaced, so lawns and Corobrik were lifted. But one of the residents said that these weren’t put in place again after repair of the pipes. Because of rains and the heavy trucks used by the municipality, potholes again appeared, which the municipality then filled with gravel.
Another resident from Bloemfontein, Erika Muller, complained about the condition of Sand du Plessis Avenue in Estoire, which she said is unacceptable and hazardous.
Muller said: “This road was originally a surfaced road that had to be scraped due to numerous potholes. Rain water eroded large parts of the gravel road, resulting in deep potholes and grooves,. During rainstorms the holes in the road fill up, resulting in deep ponds forming, spanning over the entire road. The water sometimes takes weeks to evaporate, leaving behind even deeper holes. Numerous motorists have found themselves stuck in the mud, due to misjudging how deep the water-filled holes are.”
According to Muller business people and residents along the road have to drive through this dreadful road nearly every day, causing great damage to personal and company vehicles. Suppliers who supply to businesses along the road also complain about damage to vehicles and some even refuse to deliver goods due to stock damage caused by the bumpy road. Businesses are also inaccessible to clients due to the deep holes causing damage to the low bumpers of their cars, as well as water damage to their engines.
She added that all businesses along this road pay tax to the municipality and it is unacceptable that the metro cannot repair a clearly dangerous road.
“Roads need to be restored to an acceptable condition,” Muller said.