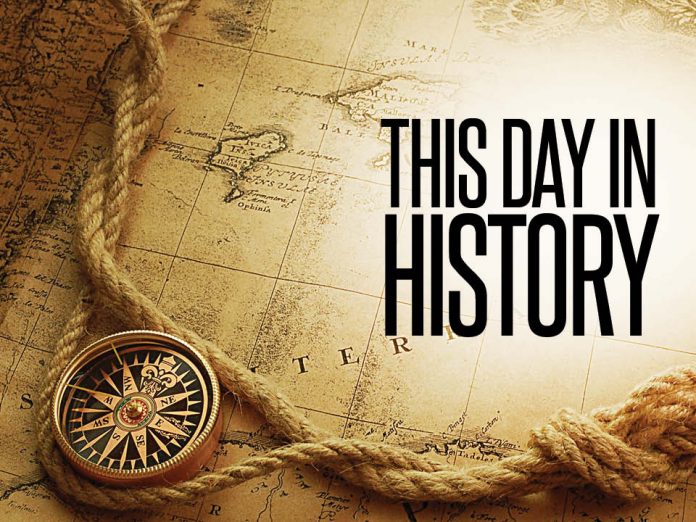 Monday, 15 February 1886
The Barolong settlement Mahikeng was renamed Mafeking by Sir Charles Warren, leader of a military expedition, after the annexation of Bechuanaland by the British. Warren was the chairman of the land commission, established to settle all land disputes in the territory after the Bechuanaland Wars. The town, which was laid out by Warren’s military force, was established within close proximity of Ga-Ratshidi, the Barolong capital. The municipality was established in October 1896.

Thursday, 15 February 1900
During the Second Anglo-Boer War between the two Boer republics and Britain, Gen. French relieved Kimberley after a siege of 123 days. Despite numerous attacks by the Boer commandos and 5 800 shells fired, the town had suffered only 134 casualties among armed defenders and twenty-one civilians, but some 1 500 people, mostly Coloureds and Blacks, had died of famine and disease. The infant mortality rate during the four months of the siege had risen to 67,1% among Whites and 91.2% among Coloureds and Blacks. The British lost at least 2 237 men of the relieving force.

Saturday, 15 February 1919
Father Frans Claerhout, acclaimed artist, priest and humanitarian was born on this day in Pittem, western Belgium. After completing his studies, he immigrated to South Africa in 1946 as a Catholic missionary. He was initially posted to the Orange Free State, where he worked among the black people living in and around Bloemfontein. He served primarily in Bloemfontein, Thaba Nchu and his beloved Tweespruit mission station. Although Claerhout did not receive formal instruction in painting, his charming style appealed to art lovers and investors alike and he held his first solo exhibition in Johannesburg in 1961. His artworks – characterised by their warm colours, thick impasto paint, exaggerated forms, humour and compassion – were exhibited widely in South Africa, as well as in Belgium, Canada, Germany, the United States and the United Kingdom. His subject matter consisted of people and animals that he encountered in his daily life. His donkey depictions are particularly well known. He primarily worked with oil paints on canvas or rough surfaces, but he also experimented widely with other media e.g. modelling in clay and wood-carving, wall-paintings, monotypes and linocuts, stained glass set in concrete windows and a prolific stream of drawings in charcoal, pen-and-ink or crayon. About four years before his death in 2006, it was alleged that forgeries were printed and sold as originals by an art dealer.

Thursday, 15 February 1962
On 15 February 1962, B.J. Vorster, Minister of Justice, announced extensive measures to “ensure the safety of the state to the absolute maximum” in view of hottest developments concerning South Africa. These developments relate to the unrest following the Sharpville massacre in 1960. And in an attempt to prevent further outbreaks of unrest, the government had passed a state of emergency and banned the ANC and the PAC. The response from the ANC and the PAC was to declare an armed struggle, marked by attacks by Umkhonto we Sizwe and POQO, military wings of the ANC and PAC respectively. Measures adopted by Vorster included; development of the security police, strengthening control of South African borders, the establishment of special mobile units for the security of the country, helicopter services to assist the established units and the extension of the police reserve plan to accommodate non-Whites. Vorster became a full minister in 1961, given the important portfolio of justice, as well as that of social welfare and pensions.

Saturday, 15 February 1986
Pretoria University developed from the Pretoria branch of the Transvaal University College. The branch was established in 1908 and has since developed into a fully functional world class University. The medium of communication was Afrikaans and the University was exclusively for Afrikaans speaking population until the mid-eighties. On 15 February 1986, the university admitted its first twenty black students. It has since opened a campus in Hammanskraal which caters for black students, and in 2004, it merged with the defunct Vista University’s Mamelodi Campus. Today the university has three languages of communication, Afrikaans, English and Sepedi.

Friday, February 15, 1991
The government of South Africa and the African National Congress announced an agreement on terms of the ANC’s decision to suspend its armed struggle against apartheid.

Wednesday, 15 February 1995
On 15 February 1995, President Nelson Mandela revealed he will not be standing for re-election in 1999. Mandela, who was released from prison in February 1990, became the first democratic president of the Republic of South Africa in April 1994. His announcement would mean stepping down as the African National Congress’s (ANC’s) and as the country’s president. The struggle icon had taken over as ANC president from Oliver Reginald Tambo in 1991. Thabo Mbeki, who was not as well-known as Mandela at the time, was to replace him as president of the ANC in 1998 and as State President in 1999. Mbeki led the ANC until December 2007, when he lost to Jacob Zuma in Limpopo. When Mandela retired in 2004, he said the now famous words: “don’t call me, I’ll call you.”

Saturday, February 15, 2014
Actress Ashley Callie, most famous for her portrayal of Leonie Haines in the soap opera Isidingo, died on 15 February 2008. Callie was involved in a head-on collision with another car. She suffered head injuries and underwent surgery the next day to relieve pressure on her brain. Though she was reported to be in a stable condition after the surgery, she passed away six days later.

All information and images are taken from http://www.sahistory.org.za/this_day/15/02