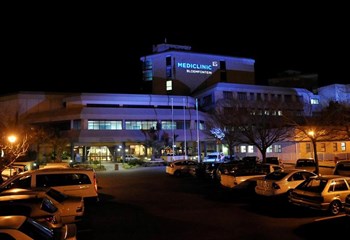 Mediclinic Bloemfontein says contrary to statements in last week’s Bloemfontein Courant, support service staff are not victims of institutional racism, but rather that the hospital had to lower increases across the board.
According to Mediclinic Bloemfontein spokesperson, Barbara Steenkamp, the hospital has had several meetings with staff members who are from the National Health Education & Allied Workers Union (Nehawu), however, no agreement on the matter of wages has been reached.
On the issue of outsourcing of staff, Steenkamp said support services do not form part of the hospital’s core services, which are nursing, technical as well as administrative functions. “Supportive functions such as housekeeping, laundry and security are more efficiently managed by dedicated service providers and this is the case at most of our hospitals,” she added.
“The union has agreed to the principles of Section 197 of the Labour Relations Act and the transfer of a going concern, where employees have the option to remain employed in pre-existing favourable conditions.”
Even so, Steenkamp said, employees still have the option of selecting voluntary severance packages, which, she stressed, must not be confused with their pension packages.
Estelle Jordaan, Mediclinic’s National Nursing general manager, said in a separate interview that while it is true that the hospital has imported nurses from India and accommodates and provides transport for them, this is only for a month. “We have found that there is a shortage of specialist nurses in South Africa, so a few years ago, we implemented a programme where we import specialist nurses from India to hire them here in South Africa. We provide them with food, accommodation and transport only in the first month of their arrival, and then let them find their own feet thereafter,” Jordaan clarified.
Meanwhile, Nehawu treasurer in the central west region, Thabiso Lala, denied that workers may be confused with the difference between their severance and pension packages.
“We have explained to our members what the difference between these two are and as we also work in line with the Labour Relations Act, we are clear on how the two differ. We maintain that the severance and pension packages of our workers are low,” Lala said.
According to Lala the strike will continue indefinitely. – Pulane Choane
pulane@centralmediagroup.co.za