The second annual MiWay National Sevens rugby tournament kicks off on Friday and this year promises to be bigger and better.

It will feature not only an U17 tournament, but also an U15 tournament featuring some of the top rugby schools in the Free State and Northern Cape.

The U17 tournament has been split into two competitions, namely a Cup and a Plate competition, which will provide for a more strength-versus-strength tournament.

Grey College will be the team to beat again this year after winning last year’s final and both their first and second teams will be playing in the Cup Competition. They will be joined by Diamantveld High School (Kimberley), Fichardt Park High School, Jim Fouché High School 1 and 2, HTS Louis Botha and the hosts, Sentraal High School.

The U17 Plate competition should provide for some thrilling rugby and is anybody’s to win.

The U15 tournament also promises to deliver some good rugby and sees the hosts, Sentraal, along with Castlebridge Combined School, Sehunelo, Fichardt Park, Tsoseletso, Grey, Louis Botha and Jim Fouché.

The development of rugby has been a key area of focus for the organisers this year and a series of two clinics was hosted at Grey and at Sentraal last week when the boys from Sehunelo and Tsoseletso got to train with top coaches, made use of first class facilities, and learnt the finer things about the game.

On top of that the kids actually executed the various drills with the players from Grey and Sentraal. They may not be the same players they will be facing on Friday, but in order to improve one has to train and play against stronger opposition.

The lads were in for a real treat at Sentraal with the “oud-Tralie” and current Springbok Sevens coach, Neil Powell, hosting the coaching clinic.

Powell told Courant that the development of the sport is more than just rugby itself. “It’s more about the person itself than the game,” said Powell. “We want to be successful and we want to do well and win tournaments and medals, but we really want to develop players through the Sevens programme.

“They need to be better players leaving the system than when they joined the system, and this is what we’re trying to achieve at national level. If there are values we can instill in the guys to be better fathers or husbands in the future, that’s exactly what we want, or even if they can be better employees for companies.

The 2016 edition of the MiWay Sevens kicks off at 12:00 on Friday, 2 September at Sentraal High School. – MORGAN PIEK 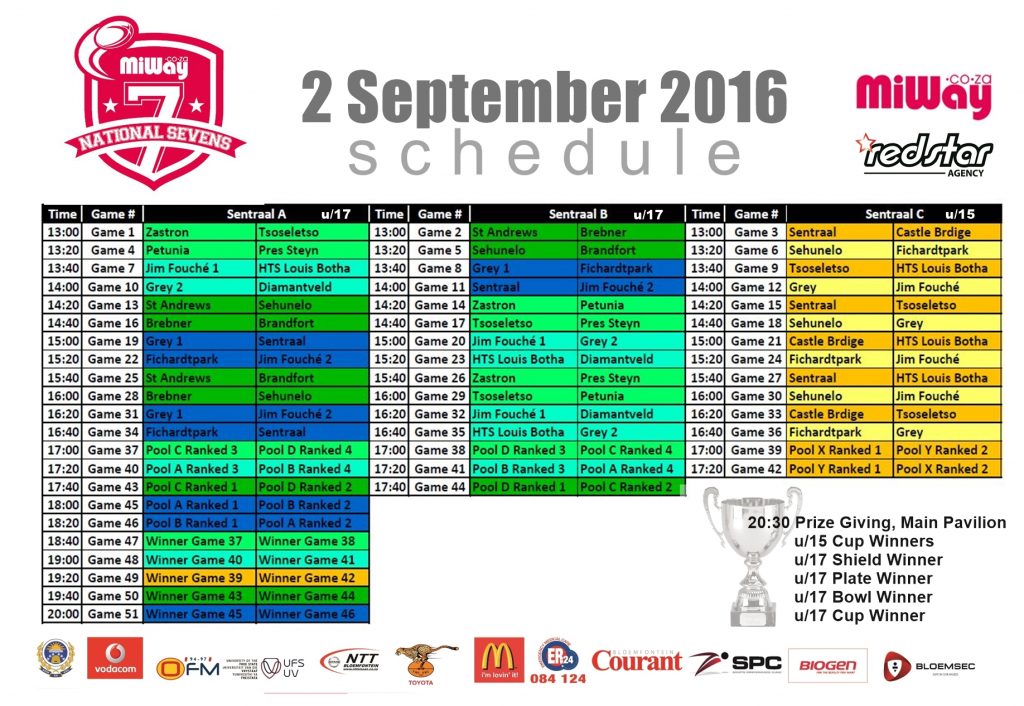