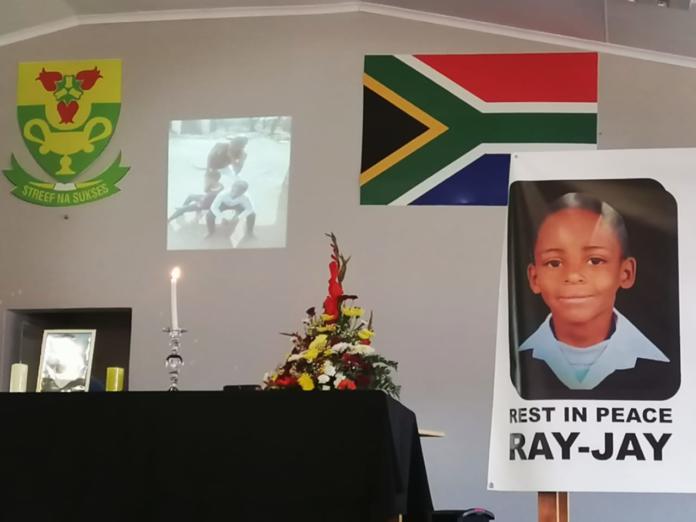 This morning Bloemfontein Courant arrived at Heide Primary school where the school hall was filled to capacity with emotional learners, staff and Heidedal residents. The gathering was for the memorial service of 10-year-old Ray-Jay Hoffman. This after his lifeless body was discovered at the Witherow Quarry, which has caused a lot of unrest in the Heidedal community as he drowned at the site.

Emotions ran high as the community came together to not only share special messages but to support the mourning family. Little Ray-Jay was known to his friends and teachers as “flash” as he was always fast and got things done. “He was friendly and very helpful with one the most beautiful smiles,” said one of his teachers.

A close friend and classmate wrote a letter to the family saying “I played rugby with him and he was as fast as the wind and no one could catch him. We were friends and we were naughty but I love you and Ray-Jay, I miss you, you were always so friendly and you were my best friend, I miss you very much,” read the letter.

Amongst the speakers was community activist, Logan Kruger who brought a heart-warming message to the family and community as well as highlighting the danger the quarry brings to the community of Heidedal. “We are not fighting nor do we blame anyone. All we are asking is for the hole to be closed,” she said. The resident supported this statement by mentioning a list of names of individuals who lost their lives at the quarry. Kruger also pleaded with the learners of the school as well as children from the community to stay away from the hole.

The grade 4 learner of Heide Primary school went missing the previous night at around 20:00 and his body was discovered on Friday 17 January 2020 by security members who were patrolling the area.