Manstopa Municipality in Ladybrand has allegedly spent R50 000 on an ANC ward councillor’s memorial service which was held yesterday(Thursday) at Itumeleng Hall.

DA councillor Tania Holser affirms during the council meeting held prior the late ANC councillor Pule Matsonyane’s memorial service, the DA rejected the ruling party’s proposal since the municipality already has a bad credit record and the spending would be an irregular expense on the municipality’s statement with the auditor general.

Meanwhile the mayor of Manstopa municipality Sello Ntsepe says this allegation is incorrect because there are hardly any expenses when conducting a memorial service.

He failed to disclose the amount the municipality cashed-out and instead says the amount was purely to assist the family of the deceased and there’ll be ‘no money wasted’.

Ntsepe was vehement in saying their policy allows for them to give the family money since they are not in contravention of anything. Holser explains a copy of the National Treasury Secular 67 does not allow for funerals or memorials services to be paid out of municipal funds. 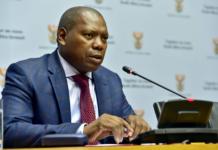