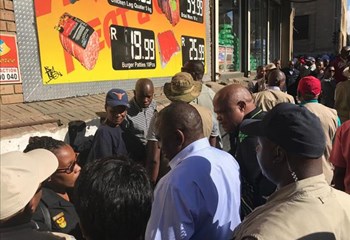 It was jubilation all around as President Cyril Ramaphosa paid a visit to the Bloemfontein taxi rank this morning.
The visit, which took place during rush hour, forms part of the ANC’s Free State leg of the Thuma Mina trail.
Residents told OFM News that they are happy the president has not only visited Bloemfontein but went to see the R400 million taxi rank which has been standing empty close to seven years after it was opened.
Street vendor Johannes Papi Mokwa says he is happy to meet Ramaphosa and have him acknowledge what he does daily. Mokwa says he is even happier that Ramaphosa is here to see this controversial taxi rank. To see how it is just standing there, being a hub for criminal activity. He references violent muggings around the rank as well as a case where a man was allegedly stabbed to death last week, to support his assertion.
The vendor mentions that he is happier that chairperson of the Greater Bloemfontein Taxi Association, Leemisa Seloane, is here. He says the community and street vendors, in particular, have had clashes with him before regarding the vacant facility. It has been reported that mere weeks after the municipality opened the Mangaung Intermodal Transport Facility (MITF) in 2011, taxi operators boycotted the building citing several structural issues.
These issues included a narrow pathway, as well as congestion at the exit and entrance, which were exacerbated by these narrow pathways. All these rendered the building of one of the City of Roses’ most notable “white elephants”.
Mokwa says commuters and street vendors are under threat in that area. Criminals often terrorise them, he says. He is hopeful that something will be done about it soon.
Motheo student and businesswoman, Kutlwano Mokoena, says she was still in high school when the facility was first opened and thinks it is sad that it is not being used. She says business owners like herself could rent the facility had it been opened.
The facility recently came up among a long list of issues during a media conference held by the EFF in Bloemfontein in June this year.
The party said at the time that proper procedures were not followed ahead of the project being carried out with only one taxi association, namely the Free State Taxi Association, benefiting from the said project.
The above-mentioned association is an entity of the Greater Bloemfontein Association.
OFM News spoke to the Chairperson of the Greater Bloemfontein Taxi Association, Leemisa Seloane, at the Free State leg of the Competition Commission’s Market Inquiry into land-based transport at Ilanga Estate, two months ago, and he said that all the taxi operators in the area fall under their association, nullifying the EFF’s allegations that their entity is the only one that benefited from the project and other taxi groups were not considered for the project.
“Who are the others?” he asked at the time.
Reports indicate that the Free State Taxi Association is engaging with Mangaung Metro to lease the rank over a long-term period. It was further revealed that the municipality would need R80 million to renovate this facility.
Residents are hopeful their concerns regarding the rank will be addressed by Ramaphosa and the provincial ANC leadership. – Olebogeng Motse/OFM News