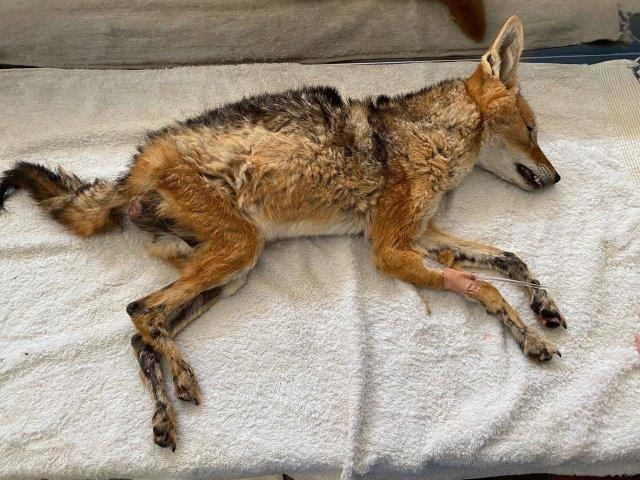 A jackal was recently saved by the Bloemfontein Society for the Prevention of Cruelty to Animals (SPCA) after it was faced a “near death” experience at a local petting zoo.

The organisation confiscated the jackal that was being held captive after they received an anonyms complaint. According to Inspector Charmaine Engelbrecht the jackal was being held in a very small cage that is not suitable for a wild animal.

“The cage had such a bad stench, that I could smell it through my facemask. The floor of the cage was full of faeces,” said Engelbrecht.

Engelbrecht has also mentioned that the jackal was forced to sleep on bare cement or dry hard mud. “Not only was the jackal being held captive in a small, dirty, and unsuitable cage without proper shelter, but it was in such a bad state that it was literally busy to die a slow and painful death,” she concluded.

The jackal was completely underweight and had a very bad skin condition. His legs had areas with little to no hair left on it. Furthermore, the jackal had two big pressure sores on the top part of his back legs. These pressures sores were so advanced and raw, that one could literally see the bone sticking through.

Senior inspector and manager at the Bloemfontein SPCA, Reinet Meyer, said that the core function of a petting zoo is to educate the public on how to take care of animals, but this petting zoo is an exact example of how not to treat and care for your animals. “It is a disgrace,” said Meyer.

A case of animal cruelty was opened against the owner of the petting zoo. The jackal was confiscated with a warrant and must undergo a series of treatment at the Johannesburg Wildlife Veterinarian Hospital, due to the bad state that it was in.

Dr Karin Lourens from Johannesburg Wildlife Veterinarian Hospital said that the jackal suffered a great deal directly as a result of being in captivity. “Jackals are nocturnal, secretive and mostly solitary animals. Being in a petting zoo would have caused unimaginable and ongoing stress. The husbandry was also of such a poor standard that the animal developed life-threatening decubital ulcers and was severely malnourished and emaciated.

It is in my professional opinion that this animal would have died a slow and painful death had he not been confiscated by the Bloemfontein SPCA. I would advise that charges be brought against the owners of the petting zoo and they be prosecuted to the full extent of the law. This is a perfect example of illegal wildlife trading and captivity and shows the horrific abuse these animals are subjected to on a daily basis,” said Dr Louerns.

Engelbrecht is calling on the public for donations to assist the SPCA with the medical costs to give the jackal the needed treatment, as well as for petrol costs. People who wish to make a financial contribution can contact the Bloemfontein SPCA at 051 447 3801 or inspectors@bloemfonteinspca.co.za