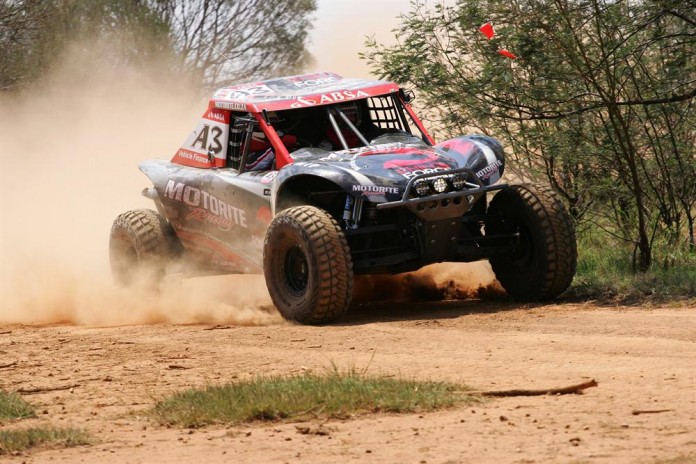 Evan Hutchison and Danie Stassen wrapped up the Special Vehicle championship when they cruised to victory on the Gold 400, the final round of the Absa Off Road Championship last week. Hutchison and Stassen, in the Motorite BAT Venom, went into the race locked in a three-way battle for the Special Vehicle and Class A championships with Johan van Staden and Mike Lawrenson (Atlas Copco BAT) and brothers Laurence and Gerhard du Plessis in a Zarco. By the end of the first of the two 170 kilometre loops that made up the race it was all over bar the shouting. Hutchison and Stassen swept through the second loop with no problems to finish well clear of the husband and wife team of Marius and Jolinda Fourie, in the PHB BAT, who ended a disappointing season on a positive note. There was also a positive end for Colin Matthews and Alan Smith, in the Century Racing CR3, who grabbed the final podium position and in the process made sure of the Class P championship.
The overall win put the seal on a perfect weekend for Hutchison and Stassen. The pair won the Donaldson Prologue, which determines grid positions, dominated the race and wrapped up two titles.