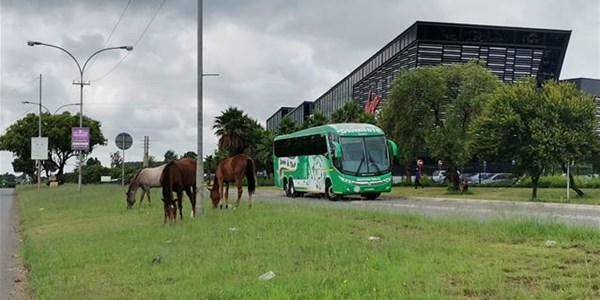 Runaway horses are grazing in the streets of Bloemfontein after apparently escaping their horse pen.

According to OFM News, these horses, belonging to an unidentified caretaker, were spotted grazing in the busy Kenneth Kaunda Road, opposite Northridge Mall, on Tuesday morning.

An employee of the Bloemfontein SPCA, Liezel Stassen, says they have received a number of reports as the horses are not allowed to walk outside of their enclosure. She says the SPCA is investigating the situation.

On a question about the possible danger of the situation, Stassen says the horses are more in danger than people as they can get hit by cars.

Stassen tells OFM News the horses do belong to someone who stays in the area. The owner will not be fined but will receive a warning to fix the enclosure to prevent the horses from running off again.

There will also be consistent inspections from the SPCA to ensure that it does not happen again, adds Stassen.