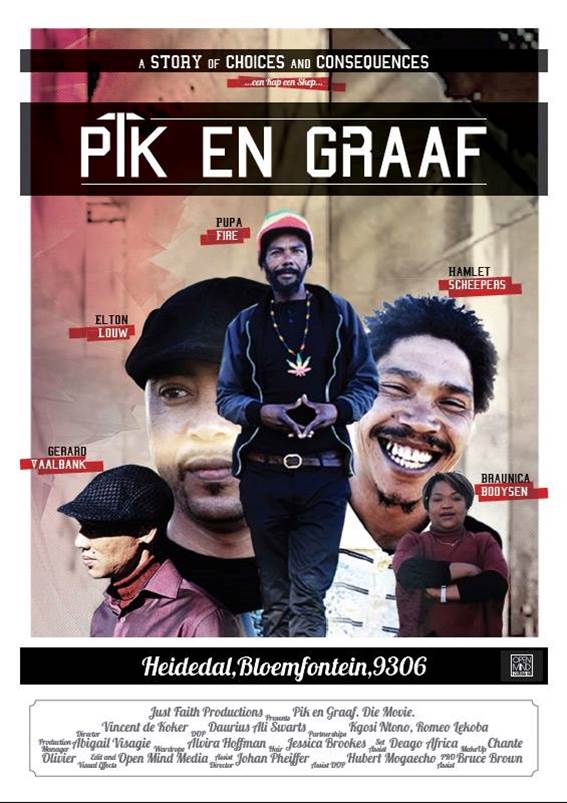 Just Faith Productions (Pty) Ltd, with directors residing in Heidedal, is currently busy with post-production of a locally produced film, titled “Pik en Graaf”, written and directed by Vincent de Koker of the highly acclaimed SABC 2 production, Majakatata.
The film, set in Heidedal, tells the story of two best friends and their daily struggles. It was shot with a cast and crew from that community, on a zero budget.
Pik en Graaf is the brainchild of De Koker, Lincoln Ortel and Donovan Louw. The idea was born after they noticed the need of the impoverish community to address the lack of theatre, television, acting and/or drama development in Heidedal.
Drama is seen as a medium for keeping the youth off the streets and occupied constructively, therefore, De Koker, Ortel and Louw started to develop the concept and Pik en Graaf became a movement that has been growing and getting stronger for the past two and half years.
The movie tells the story of two best friends and their daily struggles, who, while still residing with their parents, decide to move out because of unsavoury circumstances in their respective households.
On making this decision they also start their own business and with the help of a well-known and respected elder in the community, they soon realise that starting and maintaining a business has a multitude of obstacles. They are faced with both positive and negative influences from both the right and wrong individuals.
Still striving for their independence, the culmination of a series of events takes them on an adventurous journey of discovery: The consequences of right and wrong decisions.
Although the movie is set in Heidedal, it strives to empower the South African youth at large about the negative impact of drug and substance abuse. The official release date has not been set, but is earmarked for this summer.
For information or to pledge your support, please contact Abigail Visagie at 071-941-2997 or Charles Human at 082-849-7419.