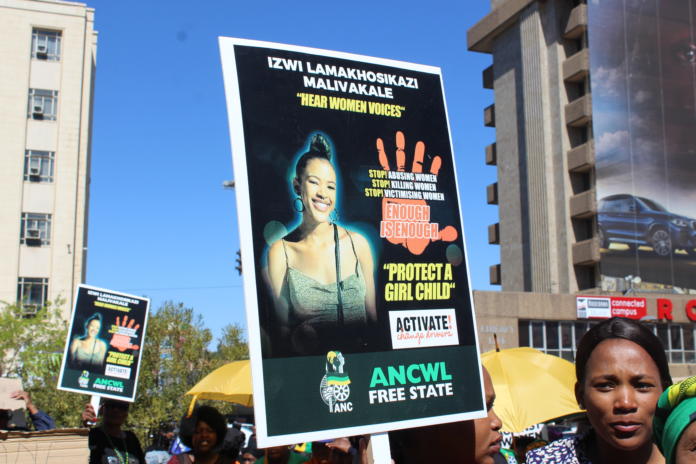 Local women marched to the hub of the city of Bloemfontein today to make their stand against gender-based violence (GBV). Executive Mayor of Mangaung Metro Municipality, Olly Mlamleli, joined the protestors in song along with the Free State ANC Women’s League at Hoffman Square.

Protestors expressed frustration at the legal system, which they claim has led to more trauma of victims of abuse and sexual assault. “What is the point of perpetrators committing terrible crimes only to be imprisoned for five years and return to the same community where their victim lives? They just should be kicked out of our society,” said Dineo Kotjomela.

Mateboho Chaka of Botshabelo shared the same opinion. “We are here today because we are so tired of people who behave like animals. They have no respect for life and if the law as it is now cannot cope, then the death penalty should return,” she said.

Regional Chairperson of the ANCWL, Mapaseka Mothibi-Nkoane, addressed the gathered crowd dressed in black in solidarity with protestors across the country.

“Many of our women are dying but we cannot allow this to happen in vain. Women do not even feel safe in their own houses because they are attacked in and outside the home. Enough is enough,” she expressed.

People should have been allowed to drink at home, say liquor traders