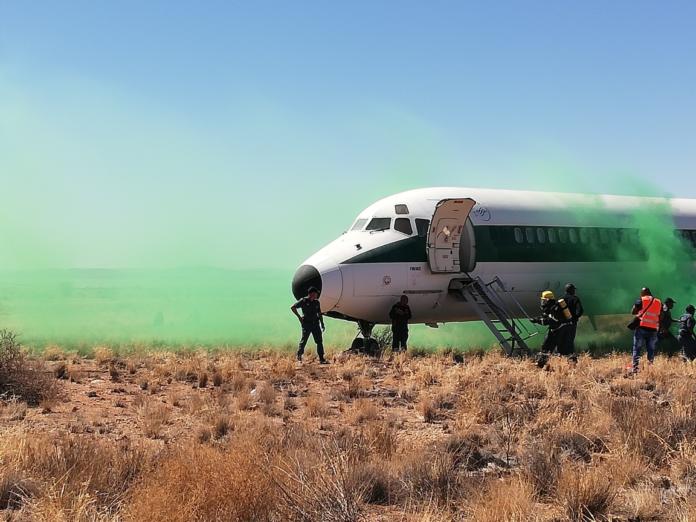 Upington International Airport has  held an emergency aircraft crash simulation today as part of its continuing efforts to remain prepared for any eventuality. Emergency simulations are required to ensure that the airport remains compliant with international aviation safety protocols. The International Civil Organisation (ICAO) and the South African Civil Aviation Authority (SACAA) require a full-scale emergency exercise every two years to test the state of emergency preparedness of all stakeholders that work with the airport authority.

“The emergency simulation was designed to test not only readiness but also the ability of all emergency services to adapt to a fast-changing situation,” said Senzeni Ndebele, Senior Manager Corporate Affairs for regional airports at Airports Company South Africa.

“During the exercise a number of sudden changes were introduced to simulate the confusion that typically accompanies any major emergency. Our emergency management team is satisfied with the ability of emergency services to cope in such conditions,” she said.

“Details of the incident were not shared in advance in order to provide the most realistic environment for first responders and emergency staff,” Ndebele added.

“It is essential that we test our state of readiness as an airport, as well as the levels of coordination among all additional resources that respond from Upington municipality. We are proud of Upington International Airport for excelling at this test. This kind of exercise also provides passengers with assurance and confidence that the airport is always trained and prepared for emergencies,” said Ndebele.