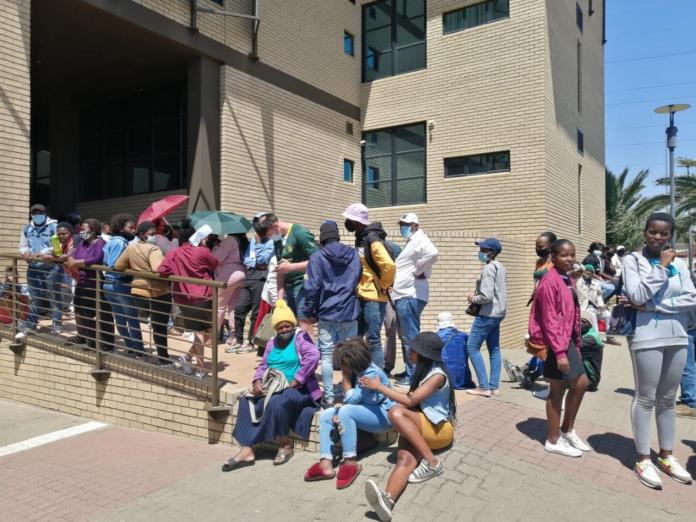 Bloemfontein residents have once again expressed their frustration and dissatisfaction with the lack of services at the Department of Home Affairs in Rocklands, Bloemfontein.

This after many have been queueing at the Home Affairs building since 5AM this morning, just to be joined by others who are joining the queue again after not being helped yesterday. Residents say that nobody communicates with them regarding how long they will still be standing in front of the closed doors.

When Bloemfontein Courant arrived at Home Affairs this afternoon it was clear that no Covid-19 protocols were being enforced. There was no social distancing in the queues and certain residents could be seen without masks.

A resident, who spoke to Courant on the basis of remaining anonymous, said she stood there until 3PM yesterday. She then left without being helped, so she decided to return this morning. She says the service is poor and they are really fed up. “We also have to use the toilets situated across the road and when we come back someone else have taken our spot.”

Another resident told the publication that she has been there since 6AM. She says that every time someone comes out of the building all they say is that the system is offline but cannot give them a time on when it will be back up and running. She said there is no social distancing and people around her aren’t even wearing masks. This is a problem for her.

Another resident says he came to apply for a new Identity Document. He says the service is extremely poor at Home Affairs and nobody has communicated anything to them, standing in the sun for hours. “There is no social distancing and this makes us uncomfortable.”

According to the acting provincial manager, Henda Erasmus, social distancing should be maintained inside and outside the office. “The office struggles to maintain such outside despite the constant deployment of queue controllers. I have the word of the office manager that the marshals are outside constantly. Inside, distancing is done by allowing only a certain number of clients into the office which is the practise all over the department.”

She explained that they have equipment for three counters to be operational in Bloemfontein for clients to apply for passports and smart cards and two counters for collections. Currently, all are fully manned. Erasmus said that she really regrets the situation and they are overwhelmed by the situation. “I am considering the deployment of mobile trucks from nearby offices outside the premises to assist, but will keep you informed about the progress. The concern will receive urgent attention.”