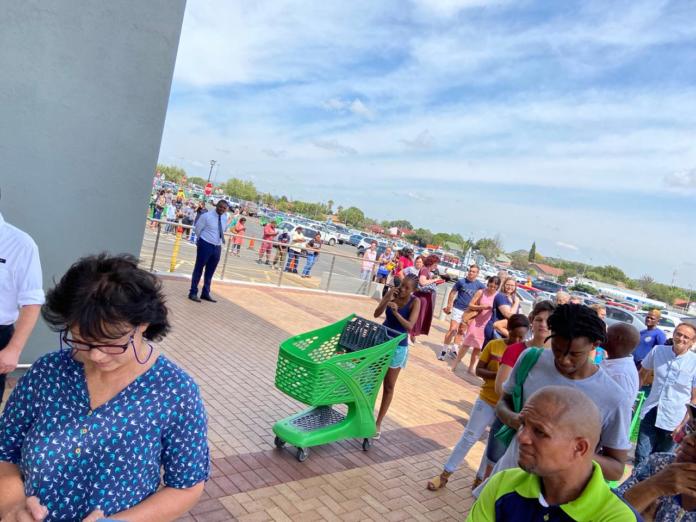 Shoppers stood in long queues today at Fleurdal Mall in Bloemfontein, not because they were out to panic buy, but because of the precautionary measures the mall’s management had put in place to control mass crowds.

Malcolm Horne, CEO of Broll Property, group told Bloemfontein Courant that these measures have been put in place 10 –12 days prior to the President’s announcement of the lockdown. He said they had foreseen panic buying and made sure they had a plan of action to control the masses. From Bloemfontein Courant’s observation, as well as comments from the security guards who would like to stay anonymous, Fleurdal Mall has organised its three entrances: two for customers entering the premises, and one for shoppers exiting.

“Each of the two entrances, as well as the exit, has a security guard who has sanitiser with them for the shoppers to sanitise when entering as well as when exiting,” Horne said. He continued by saying they met up with the owners of the building to plan exactly what measures had to be taken to ease the chaos. He mentioned that as they care about the shoppers and their health, these rules had to be put into place.

The rules that apply are that only 10 people at a time may go into the mall to shop, and as soon as these 10 people exit, another 10 may enter. These rules are to control the number of people in the building and because of the rule of social distancing. “These precautions will make shopping safer and more convenient for our shoppers,” he concluded.

President Cyril Ramaphosa last night announced that there is no need to panic buy as grocery stores will still be open. A statement by Agri SA assured South Africans that food in South Africa is secure. Agri SA said in their statement that they support the government’s efforts to combat the further spread of the virus.

“The agricultural sector is therefore working with the government to prioritise and guarantee the supply of fresh and essential agricultural products. The value chains that supply the products daily have the necessary precautions in place to protect workers and to keep supplies moving,” this according to Agri SA.