Workers have gone on strike at a Free State school that has been voted the top school in the country at the National Education Excellence Awards, Eunice Girls School in Bloemfontein.
According workers picketing outside the school premises, they are mainly unhappy about their increases and the fact that they are not being paid double time for weekend work. 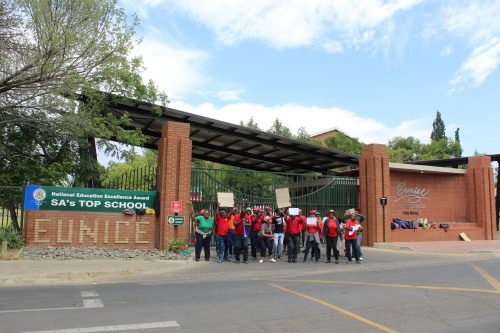 “The principal is not honouring the contract that the school has with the workers. The contract states that we should receive double payment for work done over weekends,” says Meshark Qgamani, one of the striking staff members.
On Bloemfontein Courant’s arrival at the school earlier today, a small group of workers were chanting and waving placards carrying messages such as “Top school, with low paid workers”.
Zinette de Wet, Principal of Eunice Girls School, says the matter is dealt with by the Department of Education. “This is a protected strike and therefore I can’t comment,” De Wet told Bloemfontein Courant. – Jeretha Oosthuizen
jeretha@mahareng.co.za